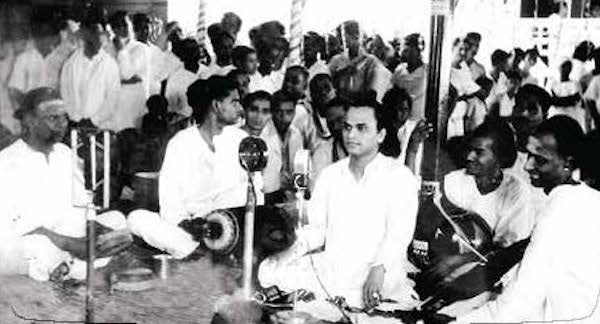 In the history of south Indian performing arts, there perhaps exists no parallel to the case of M.K. Thyagaraja Bhagavatar (1910 – 1959) where the tremendous popularity of one facet of an artist is matched by a near oblivion of another. So high is his stature in the history of Tamil cinema that he is popularly regarded as the first ‘superstar’, while the general awareness about him as a Carnatic concert singer is very low. There are some photographs of MKT in concert, but the unavailability of even one recording of his concerts is responsible for the fading out of this aspect of his artistic personality.

In MKT’s autobiographical sketch published in a special issue of Thirai Ulagam in 1948, he has shared memories, as a little boy, of hearing concerts in Tiruchi and, being then ignorant of the nuances, pining to appreciate the music as the learned did. His father knew music, though to what extent he does not reveal, and taught him the viruttam Kulam tarum selvam tanthidum, which was the first piece he learnt, and for some time, the only piece he could sing in Bhairavi. He then commenced formal training in music with ‘fiddle’ Chinnayya Pillai, whom he described as his ‘Adi Guru’ (first teacher). He desired to become a concert singer after hearing vidwans sing at the Tyagaraja aradhana in Tiruvaiyaru. Then he took music lessons from Ponnusami Iyengar, a violinist in Tiruchi, under whose tutelage MKT became trained enough to present concerts. In his first concert, Ponnu Iyengar played the violin, and we learn from Vinthan’s biography, that the redoubtable Pudukottai Dakshinamoorthy Pillai presided over the event… read more

THE STATE OF INSTRUMENTAL MUSIC

R.S. Jayalakshmi: a scholar and vainika
Scroll to top