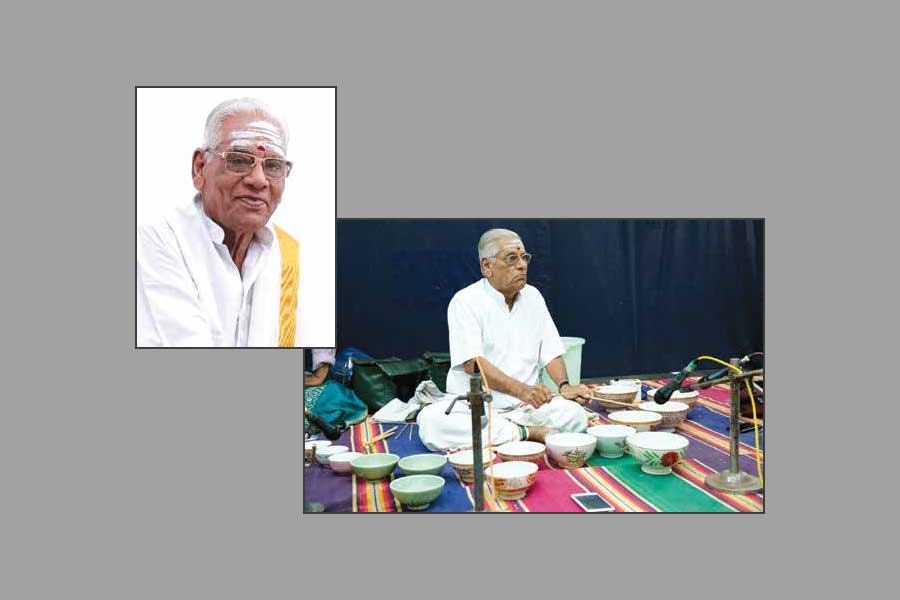 The jalatarangam, today, is secure in the hands of vidwan Anayampatti S. Ganesan. Born on 22 May 1932, the maestro turns 90 this month. His only regret is about four of the vintage cups having broken over the years!

The cups are made of original Chinese porcelain, a ceramic material largely comprising kaolin, says Ganesan. The mineral gains its characteristic strength as a result of emergence from kilns with temperatures no less than 1,400 degrees Celsius. The manufacturing technology is a millennium old, before which metal cups catered to jalatarangam music. The instrument finds reference in ancient times as ‘udaka-vadyam’ that enables playing music on water, which is listed under the 64 traditional skills called ‘chatushashti kalas’. [See Sruti 10 for a detailed article on the history of the jalatarangam.]

In the mid-19th century, when Ganesan’s father, Anayampatti Subbayar (hailed as a legend of Anayampatti Ganesan in concert (2015) jalatarangam) inherited Krishna Iyer’s treasured property, Carnatic music did not have many jalatarangam maestros. “Their presence was primarily confined to areas in Chettinad and Madurai belts,” says Ganesan. The picture today too is not rosy, but there is no scope for disillusionment either… read more

HOMAGE TO TYAGARAJA IN MYLAPORE
Scroll to top