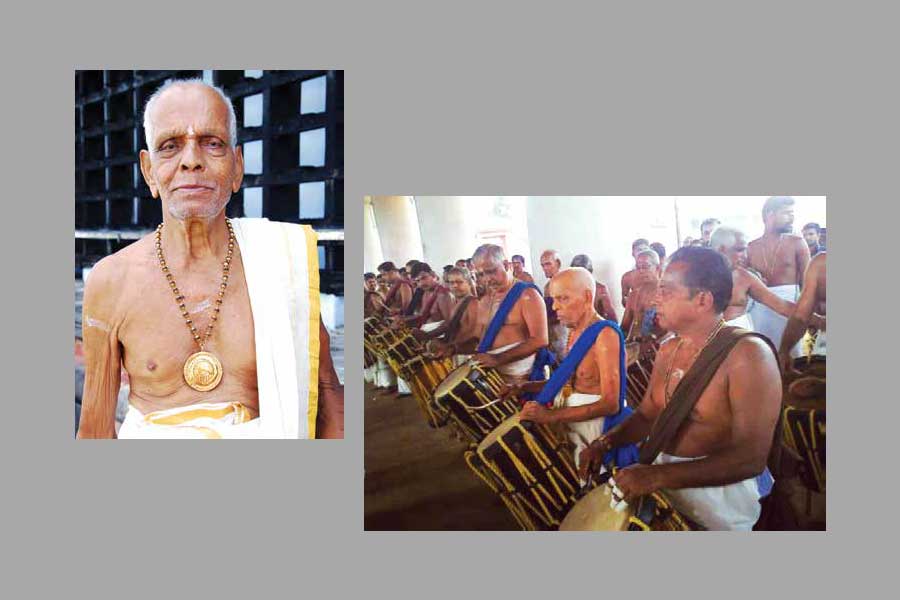 If melam processions can raise aural storeys of towering architecture, the diminutive Thrippekulam Achutha Marar lorded over their grandest of varieties. Positioned in the middle of the front row with 15-odd men playing the chenda, the ethnic drum’s five-foot tall emperor made no showy gestures to state his pre-eminence in traditional Kerala orchestras. The concerts would feature no less than 120 artists and often span four hours. Thrippekulam’s mastery made the presentation seem unassertive for the onlookers even as the rhythmic cycles revelled in classicism. As the melam continues to be the most popular ‘panchari’ or ‘pandi’, his leadership style retained the essential sobriety of temple festivities even amidst the changing aesthetics of a new age.

Thrippekulam is the name of Achutha Marar’s family based in a heritage village south of Thrissur in the central part of Kerala. As a member of one community conventionally tasked with the percussive rituals at shrines, little Achu grew up assisting elders at the Bhagavati kshetram near their modest house at Urakam. The routine acts inside the sacred precincts made life busy for the boy—before and after his school hours. During mornings and at sunset hours, he would play not just the chenda but allied instruments such as the slender timila, ilatalam (cymbals) and the chengila (gong) that keeps time. Occasionally, he would render invocatory songs while simultaneously playing the handy edakka for rhythmic rolls. The plain Sopana sangeetam notes would add solemnity to the pooja inside the sanctorum, ahead of the camphor-lit deeparadhana.

The tacit part of the tradition is that youngsters learn its basics through practice straight away, and it is only during their teens that they train formally. The brilliant in the lot delve into the theoretical nuances and emerge as maestros with an organic sense of beauty. A shining example was Thrippekulam Achutha Marar (1921-2014). As the cultural world celebrates the icon’s centenary with numerous programmes, vignettes of his eventful life mirror the successful transition of the melam’s vintage Peruvanam tradition from its feudal hangover to the modern era… read more