Shashank Subramanyam
Maestro Shashank Subramanyam, a Grammy nominated exponent of the Flute, , began performing for the general public at the age of six in 1984. He was the youngest musician to have been invited by The Music Academy, Chennai to perform the senior most slot of The Music Academy, (often performed by Legends of Indian Classical Music), at the age of 12 – a record yet to be broken in the history of South Indian Music.

Trained by father Subramanyam and vocal maestros R.K. Srikantan and Palghat K.V. Narayanaswami and under Pandit Jasraj in Hindustani Music, he is presently considered one of the best Bamboo Flute artists and is hailed so by the Indian and international media alike. The BBC World TV telecast a documentary on Shashank titled “Destination Music”, recently.

Shashank is the youngest recipient of the Sangeet Natak Akademi’s senior award for the year 2017, “A Top” ranking in the All India Radio and TV. A recipient of the “Kalaimamani” from the Government of Tamil Nadu, “Kuzhal Arasar” from the prestigious Kellogg School of Management, Chicago, the prestigious Grammy Nomination for the CD album with Guitarist John McLaughlin for the year 2009, “Proclamation to the city” award by Cities of Tulsa and Memphis, USA, Empanelled artist of the ICCR under Outstanding and senior category since 1995, Rotary awards of excellence 1995 and 1997. Shashank has over 70 CDs and several DVDs to his credit.

Sornalatha hails from a musical family. Sornalatha is the disciple of her father, Akkarai Shri S Swamynathan, a violinist himself, and teacher, she made her concert debut at the tender age of eight. She is the younger sister of the renowned violinist Akkarai S Subhalakshmi and perform together often as ‘Akkarai Sisters’, presenting Vocal and Violin duets. both vocalists.

An MA graduate from the University of Madras in Music and an A-Grade artiste in both vocal and violin at All India Radio and Doordarshan, Sornalatas name features in scores of recordings and has performed the world over with leading artists from India.

Patri Satish Kumar
Patri Satish Kumar – Mridangam, a senior Mridangam artist in the field of Indian Classical Music who features with legendary musicians across many genres of Music as a team member, soloist and in cross over Music projects. Satish Kumar has numerous contributions to his credit which have redefined the art of Mridangam playing including creations of Etiprana Talas, “Gajana” a South Indian Percussion concert presentation among many others. He has redefined the look of the instrument of Mridangam as well.

His name features on scores of CD and DVD recordings, he has recently published a book on South Indian Rhythm. An A top ranked artist of the All India Radio, he was recently honoured with an honorary doctorate in Mridangam from National Deemed University India and UC Berkeley. 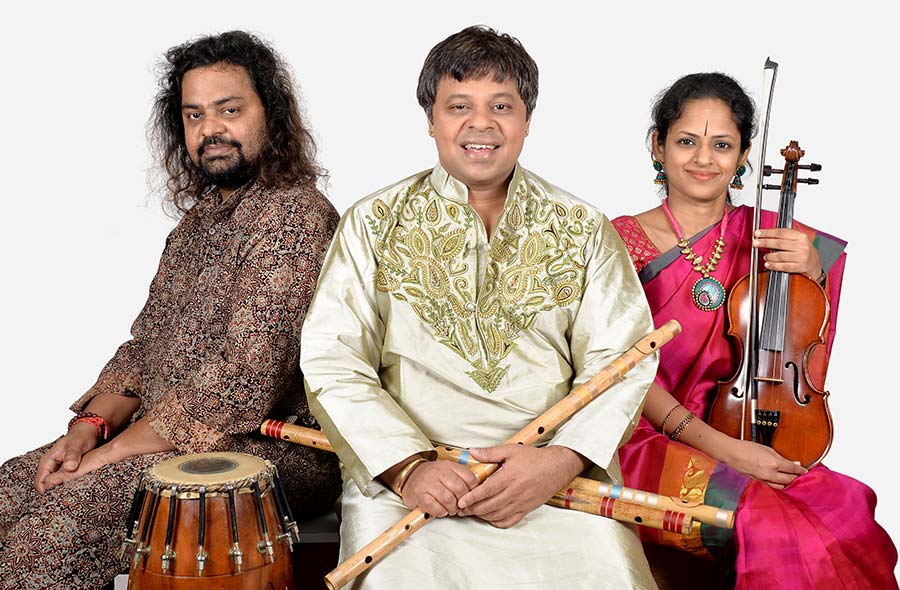