Discover the Genius of Pandit Ravishankar and Maestro Lalgudi Jayaraman

Combining dance and drama, with the original music of these two masters, the performance retraces their journey with key incidents and anecdotes from their own lives.

My script and the musical/choreographic design grew out of my personal interactions from childhood with both masters who were close family friends. My understanding acquired more dimensions when I interviewed them several times as a journalist and reviewed their concerts as a critic (The Hindu).

The violinist’s world is depicted through dance since he excelled in composing music for Bharatanatyam. In these compositions, Lalgudi depicted in music the visual scenarios he saw in his mind’s eye. Therefore, in the jatiswaram, the dancers depict a shipwrecked couple discovering and exploring an uninhabited island – a scene which he imagined as he composed the piece. With ragam and tanam, they recreate the village where the young boy found his music in field and grove, street and temple.

This section features Carnatic music with a Hindustani raga at the end which Lalgudi adopted for his tillana.

This segment focuses on four stages of the artist’s life and features his own music.

The child charming everyone as a dancer in his brother’s world-famous dance troupe in Paris; The boy surrendering to a martinet guru in Maihar. The man grappling with formidable rivals on the Indian stage, collaborating with iconic western stars (violin maestro Yehudi Menuhin & Beatle George Harrison), conquering the world. The veteran meditating on his triumphs and tragedies.

Journeying with me are brilliant actor V Balakrishnan, superb dancers Sheejith Krishna and Jyotsna Jagannathan, and inventive lighting designer B Charles, to lead the audience into the magical world of the master artists.

His songs rendered by Savita Narasimhan

Dr. Gowri Ramnarayan is a writer, journalist and musician with a lifetime’s contribution to Indian performing arts, literature, and culture. Dr. Ramnarayan has an MA (English, Osmania University) and doctorate (Comparative Aesthetics, the University of Madras).

After 23 years of service, Dr. Ramnarayan retired as Deputy Editor, The Hindu (2010). She was vocal accompanist to the legendary Carnatic musician MS Subbulakshmi in concerts in India and abroad (16 years). She translated into English two plays by eminent Marathi playwright Vijay Tendulkar (Kanyadaan and A Friend’s Story, Oxford University Press), as also the short stories of Tamil writer Kalki Krishnamurti (Penguin). She has authored biographical works, Past Forward, MS and Radha,  two children’s books (Abu’s World, Abu’s World Again) and an anthology of plays (Dark Horse & Other Plays).

Dr. Ramnarayan has been a member of the Fipresci Jury of critics at international film festivals in London, Venice, Valladolid, Oslo and Mumbai. In 2005, Dr. Ramnarayan formed JustUs Theatre Repertory, and has written, directed and produced 21 works for the stage, showcased at significant venues and prestigious festivals in the major Indian cities. Some have toured abroad. Her multi-genre and multi-lingual productions combine theatre, classical music, dance, and elements from the folk arts. She has composed critically acclaimed musical scores for these productions. 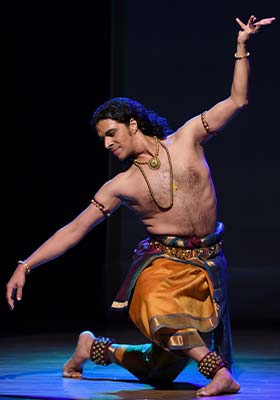 Sheejith Krishna is India’s leading Dancer and Choreographer,also the Director of Sahrdaya Foundation. Sheejith Krishna studied, then taught, at Kalakshetra Foundation, the world-renowned institution for the classical arts in Chennai, India, for 21 years. Now an independent artiste and choreographer, he has learnt Bharatanatyam, percussion, and vocal music from such stalwarts as Sarada Hoffman, Vikku Vinayakaram, and S Rajaram.

He choreographed and directed for the Kalakshetra Repertory, the innovative Masquerade, an adaptation of Alexandre Dumas’s Man in the Iron Mask in the idiom of Bharatanatyam, to critical and popular acclaim. He received a national production grant from the Government of India’s Ministry of Culture in 2015 for his original Bharatanatyam adaptation of Don Quixote that toured India and USA extensively. He is the recipient of the Sangeet NatakAkademi’s prestigious Ustad Bismillah Khan Yuva Puraskar (2007), Sri Krishna Gana Sabha’s Yagnaraman Award for Excellence in Dance (2010), and the Ram Gopal Award for Best Male Dancer (Atten DANCE, 2015). He choreographed the dance sequences for Ang Lee’s Academy award-winning motion picture, Life of Pi.  Sheejith has also taught workshops and courses for prestigious organizations and choreographed solo and group productions for many eminent artistes around the world.

V. Balakrishnan, an alumnus of Sri Ram Centre for Performing Arts (New Delhi) and the National School of Drama (New Delhi), is the founder and artistic director of Theatre Nisha (Chennai), and has staged over 100 plays in the past 18 years under its banner.He was awarded the Charles Wallace Scholarship to attend an International Residency for Young Directors with the Royal Court Theatre, London. He currently teaches theatre at Arsha Vidya Mandir, Alpha to Omega Learning Centre, and is an adjunct faculty at the Asian College of Journalism. He has been using theatre as a tool to improve communication and manage learning disabilities with school students for nearly two decades. He has been associated with over 15 schools in his teaching career and taught several budding actors at the BaluMahendraInstitute, LVP Prasad Institute and Rajiv Menon’s Mindscreen. He has directed over 200 plays, acted in over 150 plays and written 10 scripts. He has worked with several international dancers and theatre professionals on collaborative projects, including Performance Group Tuida, from South Korea.  He has to his credit several workshops on different aspects of theatre, which have benefitted artists, teachers, dancers, students, and members of marginalized communities. In 2015, he was invited to be a TEDx speaker at the Bangalore convention, where he spoke on ‘How to Build a Character?’ He was awarded the Fulbright Distinguished Award in Teaching 2017 at Indiana University.

Smt. Jyotsna Jagannathan received her initial training in dance from Shrimati Jayanti Subramanian and pursued advanced training under Shri A. Lakshmanaswamy. Presently, she is learning under the able guidance of the eminent guru, Smt. Malavika Sarukkai. Smt. Jyotsna Jagannathan has performed in acclaimed dance festivals across the globe. She received the prestigious Sanskriti Fellowship in 2015. In recognition of her talent, the title of Nadanamamani has been conferred upon her by Kartik Fine Arts. Smt. Jyotsna Jagannathan is awarded the Ustad Bismillah Khan YuvaPuraskar of Sangeet NatakAkademi for the year 2016 for her notable talent in the field of Bharatanatyam dance.