Born in Hyderabad, India, Yamini Kalluri has been celebrated by the New York Times and BBC as being a Kuchipudi sensation. A disciple of legendary guru, Padmasri Dr. Sobha Naidu, Yamini began exhibiting signs of her extraordinary talent and dedication to dance at a very early age. At the age of 12 she not only began performing throughout India but also began teaching. She went on to complete a certification course in Kuchipudi from Potti Sreeramulu Telugu University, Hyderabad with distinctions in 2013 and further refined her style under the mentorship of the renowned Kuchipudi guru Vempati Ravi Shankar. At 18 she began performing internationally at various prestigious festivals, offering workshops in the UK, the US, Russia, Argentina and Canada. She has also been part of Madras music and dance season in 2016 and 2017 as part of Parthasarathy Swamy Sabha and Ganamunkundhapriya. A world-class dancer, Yamini is known for her grace, agility and uncompromising perfection. Aiming to bring a new face to Kuchipudi, her ambition and passion led her to move to New York where she now teaches, performs and trains in ballet and modern dance at the Martha Graham School of Contemporary dance full time. Yamini is now a touring artist with The National Council of the Traditional Arts to represent Kuchipudi across the United State in National festivals. In exploring various disciplines of dance and music in the west Yamini has not only developed her own unique style and technique but has also expanded and diversified her dance repertoire by collaborating with many talented musicians. 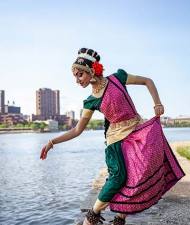 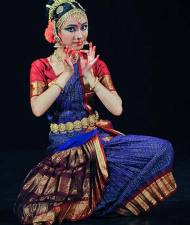 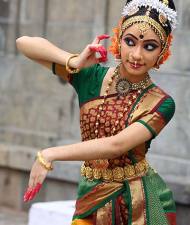