You are here: Home1 / Blog2 / Sruti Articles3 / Ganesh and Kumaresh – a quest for ‘pure’ music 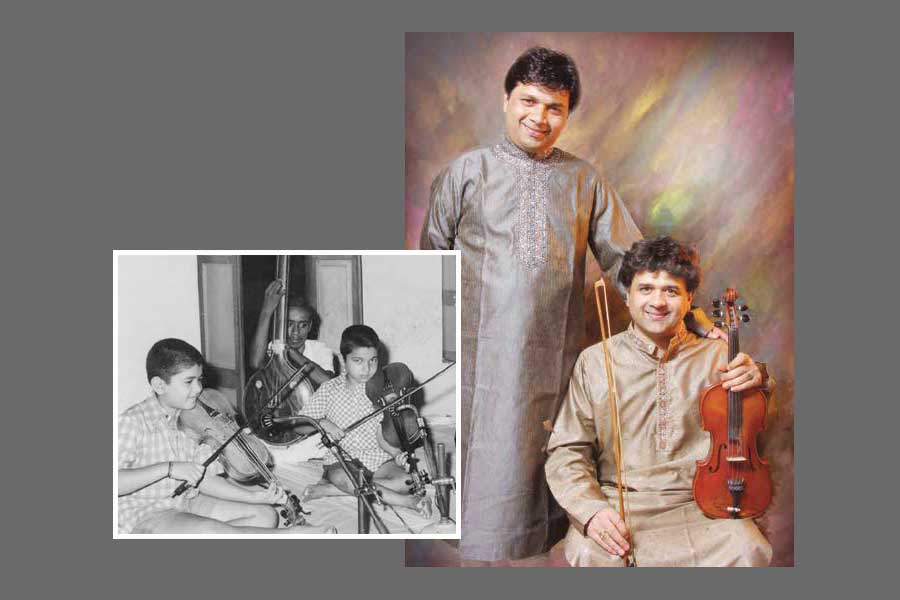 When Ganesh (born 1964) and Kumaresh (born 1967) ascended the Carnatic concert stage in 1972, the image of the violin as an accompanying instrument in Carnatic vocal concerts had been well-etched in the minds of audiences and musicians alike. By then, Lalgudi G. Jayaraman, M.S. Gopalakrishnan and T.N. Krishnan had achieved remarkable success as solo violinists, each with their distinct style. It could not have been easy for the young boys to start out as a violin-duo at such a time. But the youngsters were fortunate to have their own father, T.S. Rajagopalan, as their teacher and mentor, who seems to have had an intuitive understanding of how to channelise his children’s prodigious talent.

It was not long before the boys were hailed as child prodigies. Their grasp of the Carnatic idiom, combined with robust technique and charming on-stage demeanour, soon helped them capture the imagination of the Carnatic audiences. They became the youngest violinists to receive the Kalaimamani award in 1997. Chief Minister of Tamil Nadu, M.G. Ramachandran, a lover of music himself, named them the “State artists of Tamil Nadu” in 1984.

Such early adulation only increased the duo’s enthusiasm for pushing the boundaries of their music and violin-play. Today, with more than forty years of concert experience behind them, they employ the ragam-tanam-pallavi as the perfect vehicle to convey their musical ideas. Their raga alapanas seem to look at the notes of a raga, their movements, and interconnections afresh. The brothers seamlessly complement each other’s ideas on stage. If Ganesh chooses traditional raga essays, Kumaresh ventures into new territory and vice versa. Masters of technique, their extempore sections abound in complex rhythms presented with clarity. To keep audiences engaged, they explain musical features, or ask them to suggest notes of a raga for their pallavis. They have earned many rasikas who seek out their concerts to relish the novelty of their approach… read more

LOCKDOWN EVENTS – Leveraging social media as a platform for Carnatic ...

Live for you online
Scroll to top