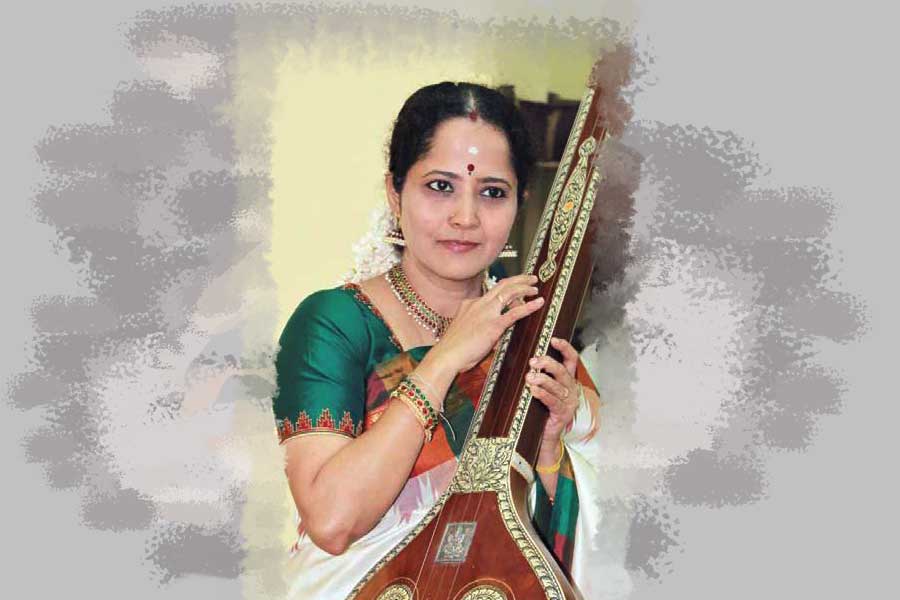 Listening to the music of Palghat K.V. Narayanaswamy as a young girl was an epiphany moment that changed her entire perspective on music. As a curious backbencher during season concerts at Sri Krishna Gana Sabha, her interest in music further swelled. With no musical lineage to rely on, she had to work doubly hard towards sustaining her interest in music. Her sincerity towards the art and her perseverance is what has brought her to where she is today. Dubbed by critics as a versatile and an engaging performer, Gayathri Venkataraghavan has carved a niche for herself. Her father, however foretold this when she was just ten days old! Christening her after eminent vainika, E. Gayathri was perhaps the harbinger for more things to come.

An obedient child, Gayathri started training under Lakshmanan Vadhyar when she was seven years old and after his demise she went on to learn from Rajalakshmi, who nurtured Gayathri’s love for music with small songs and kritis. Later, in 1981, Gayathri came under the tutelage of Padma Veeraraghavan, direct disciple of Ariyakudi Ramanuja Iyengar and K.V. Narayanaswamy. Enamoured by KVN’s music, learning under Padma Veeraragahavan was a turning point for Gayathri. Her listening and learning repertoire widened and she actively started pursuing her interest in music. Seven years with her guru Padma, Gayathri spent many hours in rigorous practice and also participated in several competitions conducted by prestigious sabhas in Chennai. In 1990, Gayathri came under the guidance of vidwan A. Sundaresan.

Gayathri got married in 1993 and moved to Madurai / Tirunelveli as her husband’s career demanded the move. Although it witnessed a hiatus in her career, she successfully bounced back into the performing scene after eight years and continued her training under A. Sundaresan. Her trajectory since then has been a true testament of her perseverance and undivided passion towards her music. Gifted with a robust, clear voice, she spans across octaves with ease. Gayathri is also among the most thoughtful, independent-minded and articulate singers in her generation. Her clarity of thought, the wealth of experiences she has gained from all her gurus, unfussy presentation and her ever-smiling attitude is what makes Gayathri who she is… read more

Live for you online