You are here: Home1 / Blog2 / Sruti Articles3 / HOMAGE TO TYAGARAJA IN MYLAPORE 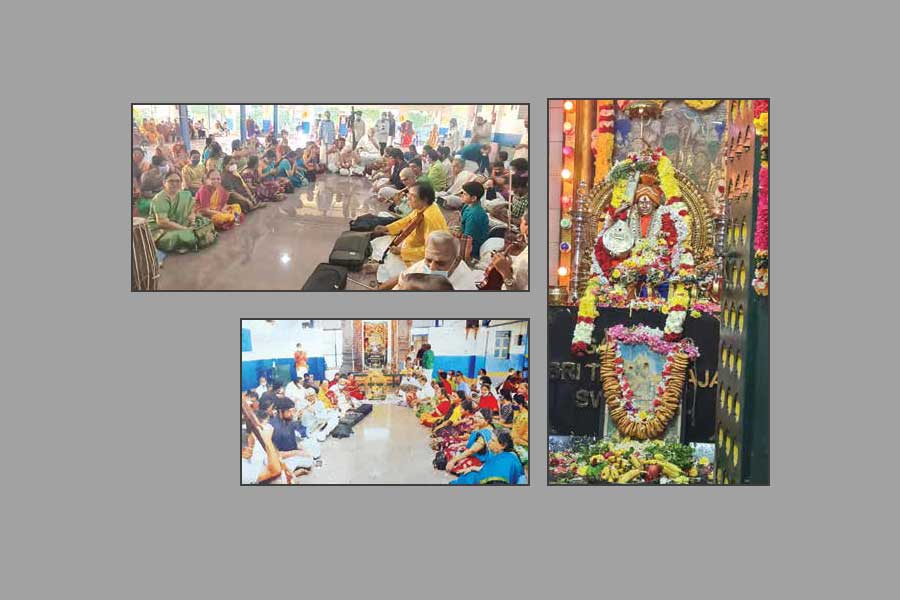 The annual Tyagaraja aradhana was celebrated by Sri Mannargudi Sambasiva Bhagavatar Cultural Trust on 12 February 2022 at Mylapore in Chennai; it was organised by S. Rajaraman, the Managing Trustee. A host of eminent vidwans and vidushis – including several vocalists, violinists, mridangists, flautist, and vainika—participated in the celebration and diligently rendered the pancharatna kritis. This was followed by the Anjaneya utsavam.

The musical offering commenced with the kriti Chetulara rendered by vidwan Prapancham Balachandran, followed by all the musicians presenting Sree Ganapatini, Gurulekha and the pancharatna kritis – a total of eight compositions in all. It may be noted that at Tiruvaiyaru, every year, the aradhana commences with the playing of Chetulara on the flute—a custom started by Palladam Sanjeeva Rao, years ago. This year, Sri Mannargudi Sambasiva Bhagavatar Cultural Trust followed the same tradition. The aradhana concluded with the kriti Geetarthamu dedicated to Lord Anjaneya. The sahasranama archana designed by Sambasiva Bhagavatar, based on Jagadananda, was performed to the portraits of sadguru Tyagaraja and Sambasiva Bhagavatar. The event came to a close with S. Rajaraman thanking the vidwans, vidushis and rasikas who participated in the function.

M.A. Sundareswaran briefly spoke about the origin of the Tyagaraja aradhana and described how years ago, the doyens of Carnatic music used to individually sing the pancharatna kritis at Tiruvaiyaru. Later, after discussing among themselves, all the musicians started singing the kritis in chorus as a homage to Tyagaraja. It has been resolved by Sri Thiagaraja Sangeetha Vidwath Samajam in Chennai to sing all the eight kritis (mentioned above) during the aradhana festival next year… read more