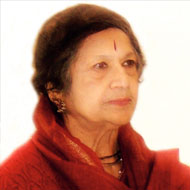 Famed in India as “Kumari Kamala” during her prime as a dancer, the acclaimed Bharatanatyam exponent has dedicated about seven decades of her life to its propagation. Endowed with a rare and uncommon prowess at the art, her name has become synonymous with the dance form. She began performing classical dances in many Indian films in several languages, including Hindi, since the late 1930s at the age of five, till about the mid 1960s. One of her best known films includes, Naam Iruvar in Tamil, based on the patriotic songs of Tamil poet Subramania Bharati …read more