Sangita Kalanidhi Mangalampalli Balamuralikrishna was a charismatic Carnatic vocalist of great popular appeal, with a career length that spanned seven decades. Debuting as a child prodigy in the 1940s, he was a constant presence in the concert scene of the twentieth century, and achieved elder statesman status in the new millennium. 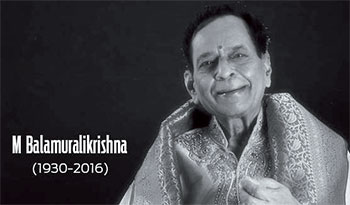 The traditionalist found him a somewhat idiosyncratic singer, but had to concede that he had a powerful voice undiminished by age. A versatile modern composer, he was also a creator of ragas, a claim hotly contested in some quarters. Balamuralikrishna was often a controversial figure too, an innovator who questioned so-called tradition in a manner that shocked the purist. He once told Sruti that tradition was to him merely the grammar of music, the seven swaras and the laya systems.

Though he crossed swords with those who questioned his authorship of new ragas, he forgave and forgot easily. He filed a defamation suit against Semmangudi Srinivasa Iyer for derogatory remarks he made against him, and forced him to apologise in writing before the presiding judge, but later, the two became good friends …read more