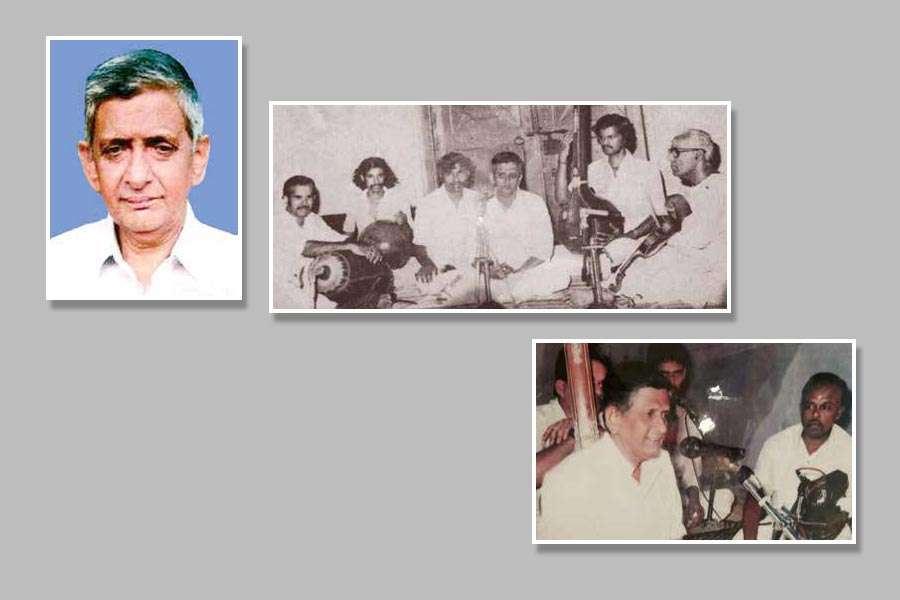 The venue was a temple in Mavelikkara, a small town in Alappuzha district of Kerala, where thousands of music lovers had gathered to drench themselves in the music of nagaswara chakravarty Tiruvaduthurai T.N. Rajarathnam Pillai (TNR). Before the concert began, a boy was brought to TNR with the request that he bless the music student. The maestro asked him to sing and the lad unleashed an alapana of Todi followed by Jesinadella, which TNR had made famous! The youngster sang TNR’s sangatis with all the flourishes and long karvais of nagaswaram music — which remained a dream for many aspiring musicians. After the alapana, the nagaswara giant hugged the boy and blessed him for a great career in music. The boy was Mavelikkara Prabhakara Varma—who later went on to become a successful musician and a revered guru who groomed hundreds of musicians.

Prabhakaran’s family members were surprised that the little boy could impress Pillaival without any formal training in music. When asked, he innocently replied that he loved nagaswaram and had learnt the Todi raga from TNR’s LP record! In fact, Prabhakara Varma was called “Peeppee Ammavan” by boys in the family for his faultless reproduction of the sound of the nagaswaram through his mouth. He was in the habit of listening to the gramophone records of Ariyakudi Ramanuja Iyengar, Maharajapuram Viswanatha Iyer and other maestros very intently and would flawlessly render the songs in family gatherings. There was, however, one problem that he endured throughout his life—his leg was affected by polio since his birth, and he used custom-made shoes to walk.

Prabhakara Varma hailed from the Mavelikkara Palace, where an unbridled passion for music marked his formative years. His family was closely related to the family of Maharaja Swati Tirunal. Born in 1928 to Chandra Prabha, daughter of Kerala Panini A.R. Raja Raja Varma (a prolific Malayalam litterateur) and Rama Varma of Kilimanoor Palace (nephew of Raja Ravi Varma), Prabhakaran’s inspiration for music stemmed from the classical songs heard from his maternal aunt Bhageerati. Thus, Prabhakaran inherited a rich legacy of literature, painting and music right from his childhood. While studying in school, he participated in a music competition held in connection with the birthday celebrations of Maharaja Chithira Tirunal, in which he bagged the first prize. Recognising the genuine interest of the boy, his family now arranged for his formal music lessons from Mavelikkara Veeramani Bhagavatar who lived nearby, and Mavelikkara H. Ramanatha Iyer, who was a faculty in the Swati Tirunal Music Academy, Tiruvananthapuram. Prabhakaran had his arangetram at the Chengannur Mahadeva Temple when he was thirteen years old… read more