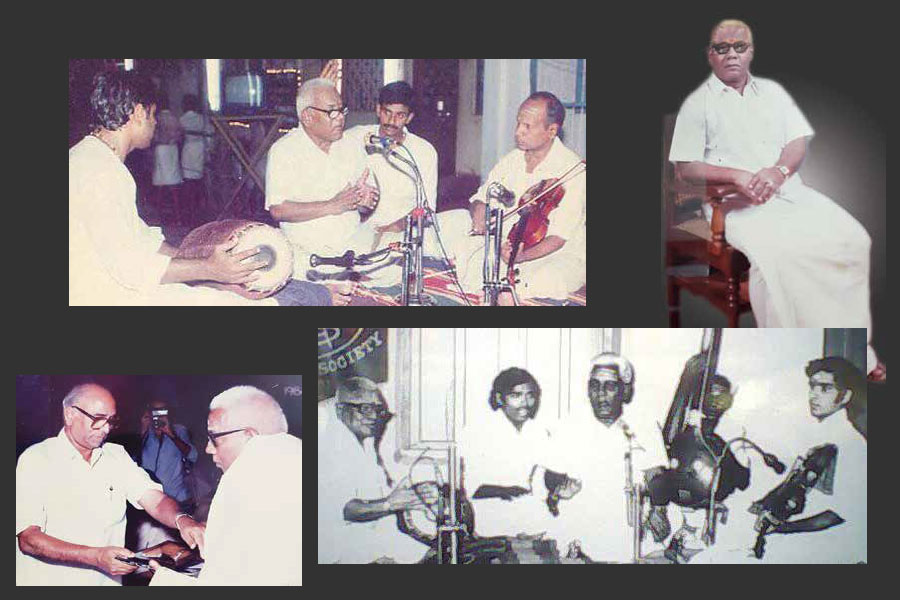 The establishment of the Sri Swati Tirunal College of Music in Tiruvananthapuram in 1939 was a milestone in the history of Carnatic music in Kerala. It was the result of the vision of three outstanding individuals— Maharani Sethu Parvati Bayi (mother of Sree Chithira Tirunal Maharaja), Sir C.P. Ramaswami Iyer (Dewan of Travancore) and Semmangudi Srinivasa Iyer. The academy was established with the primary objective of propagating the compositions of Swati Tirunal. Harikesanallur Muthiah Bhagavatar was roped in as its first Principal and he painstakingly collated the manuscripts of the kritis of Swati Tirunal from various sources, tuned them and popularised them. Semmangudi Srinivasa Iyer took over from Muthiah Bhagavatar as Principal, to be succeeded by such illustrious musicians as G.N. Balasubramaniam and K.S. Narayanaswamy. This institution can really be proud of producing a bunch of talented musicians among whom Vechoor Hariharasubramania Iyer occupies a prominent position.

Hariharasubramania Iyer was born in Vechoor, a quiet village in Kottayam district, to Neelakanta Iyer and Janaki Ammal on 11 November 1925 as their second child among four sons. Noticing his taste for Carnatic music from an early age, his parents engaged nagaswara vidwan Chertala Kuttappa Panicker for preliminary lessons. After his matriculation, Hariharasubramaniam enrolled in the Swati Tirunal Music Academy of Trivandrum in 1943 and passed the Gana Bhushanam course in First Class in 1947. As a student, he acquired a wealth of compositions of the likes of Swati Tirunal, the music Trinity, Purandaradasa, Papanasam Sivan, and Arunagirinathar, from the faculty which included great masters like Semmangudi Srinivasa Iyer, C.S.Krishna Iyer, M.A. Kalyanakrishna Bhagavatar, K.R. Kumaraswamy Iyer, Musiri Subramania Iyer, and G.N. Balasubramaniam (visiting faculty)—and the subtle nuances of Carnatic music. He also underwent gurukulavasam under Semmangudi Srinivasa Iyer for five years to further hone his skills.

Hariharasubramania Iyer joined the faculty of the RLV (Radha Lakshmi Vilasam) College of Music and Fine Arts, Tripunithura, in 1947. Later he got transferred to his alma mater, the Swati Tirunal College of Music, Trivandrum, and retired from service in 1980. Post retirement, he served as Visiting Professor in the RLV College of Music in Tripunithura, and the Chembai Memorial Government Music College in Palghat, besides holding the post of Principal of the Sree Chithira Tirunal College of Music run under the aegis of the Sree Swati Tirunal Sangeeta Sabha, Trivandrum. While heading this institution, he undertook a project of publishing notations for all the songs covered in the syllabus for the various courses, but breathed his last before completing the task… read more

Debate – of microphones and acoustics
Scroll to top