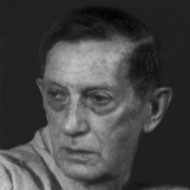 On the occasion of Alain Danielou’s centenary celebrations which culminated in October 2007, the Alain Danielou Foundation, with branches in Rome, Berlin and Paris, presented a series of concerts and exhibitions in different Italian cities related to the life and work of the great musicologist and scholar. One of the major events of the series was the presentation of seven songs by Rabindranath Tagore translated into Western musical notations for voice and piano by Danielou, at Tagore’s request. Danielou was a great friend and admirer of Tagore …read more

Old is gold, so what’s new?
Scroll to top