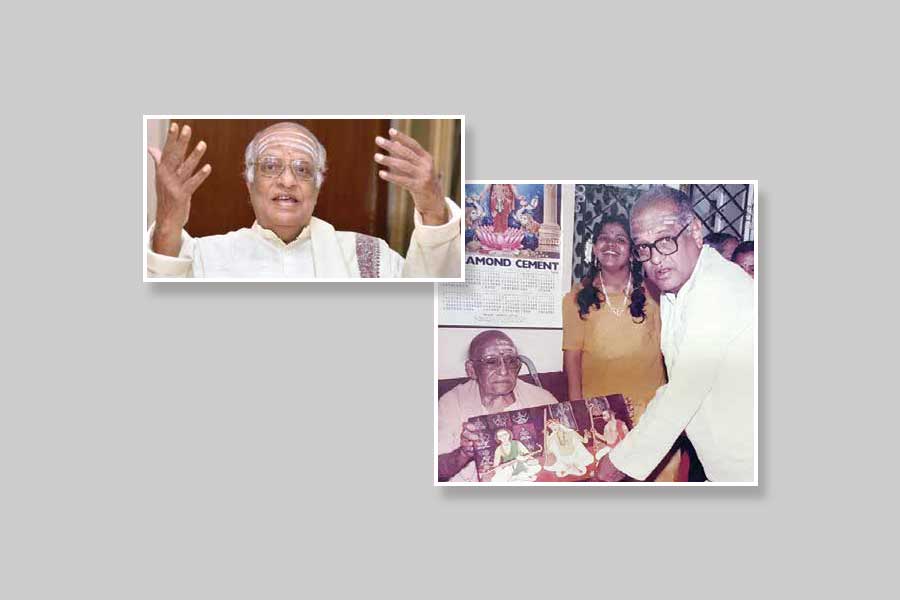 With the passing away of Sangita Kala Acharya P.S. Narayanaswamy, the music fraternity has lost one of its most valuable gems. Truly he was a great acharya in many respects, and in his role as a teacher he has trained many disciples and helped them to advance in their musical career. He was always willing to share his knowledge with others.

I have heard many musicians talk about his pathantara suddham and accurate notation. The students and aspiring musicians who had studied with him and received his guidance and blessings are very fortunate indeed.

PSN was a wonderful human being with pleasant manners. As an ardent disciple of Semmangudi Srinivasa Iyer, PSN has propagated his guru’s bani among younger started performing with him, providing vocal support. I fondly recall the concert of Semmangudi Srinivasa Iyer at the marriage function of Radha Viswanathan in Kalki Gardens, in which I played in tandem with my guru Palani Subramania Pillai. PSN and Kedaram provided vocal support at this concert. Subsequently there were many concerts of Semmangudi in which I accompanied, and PSN had provided vocal support.

I also had the opportunity to perform in PSN’s solo concerts on several occasions, notably the one at Sri Krishna Gana Sabha in the 1970s. In all these events, I noticed how faithfully he was following Semmangudi’s style of music without compromising the core values of the Carnatic tradition. I have admired his sweet voice and accommodative nature with his fellow musicians and his humility. For a person of his vidwat, he was so humble and unassuming. In my opinion he truly deserved the Sangita Kalanidhi, but I am happy that the Music Academy honoured him with the title, Sangita Kala Acharya… read more

A tribute to unsung heroes

THE LALGUDI SIBLINGS – Complementing each other
Scroll to top