You are here: Home1 / Blog2 / Sruti Articles3 / R.S. Jayalakshmi: a scholar and vainika 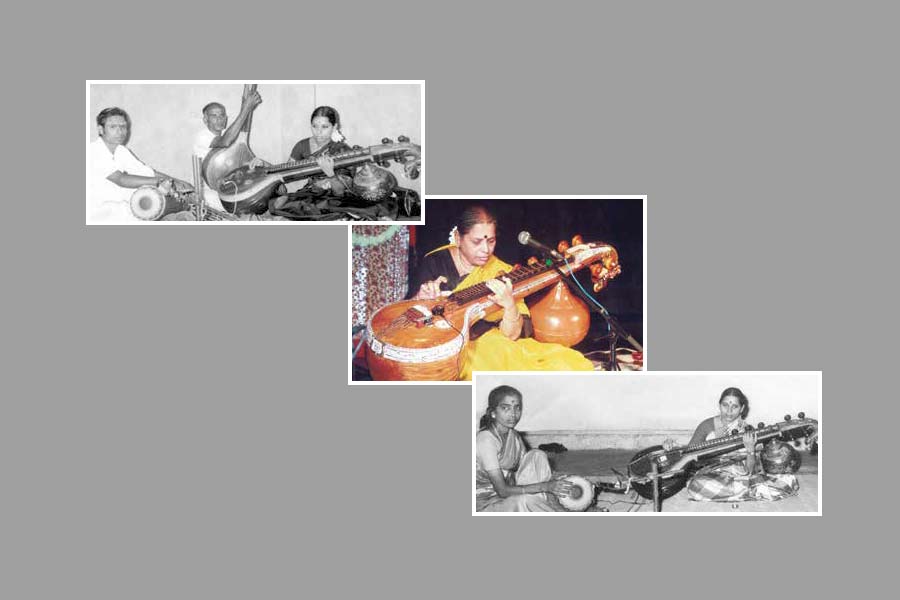 Veteran R.S. Jayalakshmi is a respected vainika, teacher and musicologist. She was initiated into music when she was just six years old. Jayalakshmi used to observe her older sister in music class, and had a natural flair for repeating all the lessons that she heard! Realising her innate talent, her father, R. Subramanian Iyer, arranged to teach music to his younger daughter also. As he owned a store that sold musical instruments, both the sisters were initiated into learning instrumental music. As her sister played the violin, Jayalakshmi chose to learn the veena.

Jayalakshmi’s first veena teacher was Muthiah, a staff at All India Radio. As managing class timings with a busy career became difficult for him, she moved on to learn from vidwan V. Raghavan (vocalist Sriram Parthasarathy’s grandfather). He began straight away with a varnam when she was perhaps only seven or eight years old. Jayalakshmi continued to learn vocal music along with her sister till the latter got married, after which Jayalakshmi started attending the vocal classes conducted at Sri Krishna Gana Sabha by Kittamani Iyer.

Jayalakshmi did her schooling at Sarada Vidyalaya, where too, she chose to learn music; her teacher was A. Meenakshi, sister of mridangist Kalpathi Ramanathan. Later, she enrolled for the Teachers’ Training Course at the Music Academy. Ramachandraiah was in charge of pedagogy, and some of her teachers like Mudikondan Venkatarama Iyer, B. Krishnamoorthy, and T. Jayammal were eminent musicians. When she was 21 years old, Jayalakshmi obtained a Government of India scholarship to pursue veena lessons from Pichumani Iyer. By then, she had started performing for All India Radio as well as at sabhas like Sri Krishna Gana Sabha and the Indian Fine Arts Society. Jayalakshmi had the opportunity to learn padams and javalis from the inimitable T. Mukta who also taught her several compositions of Muthuswami Dikshitar and Subbaraya Sastry… read more

A PEEP INTO THE PAST