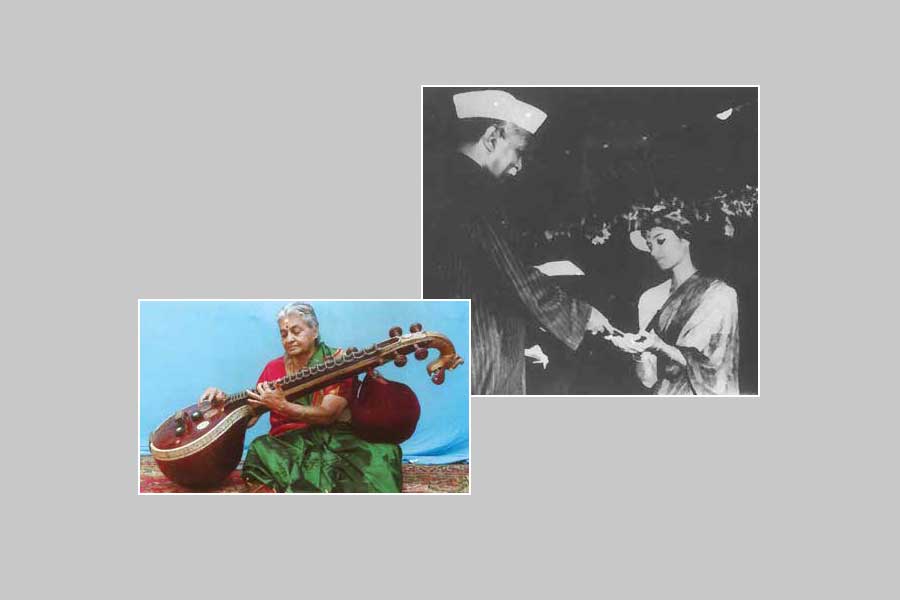 When we delve into the history of music, we can find several musicians across generations who have been leading a solitary life in their native land, devoting their time to teaching and accepting the rare concert opportunities that come their way. They do not chase fame, money or concert opportunities but lead a life of contentment. Their devotion to the art and the commitment to pass on their knowledge to the next generation is worth emulating. One such vidushi is vainika Rugmini Gopalakrishnan, who has been spreading music in Tiruvananthapuram for seven decades now.

Rugmini was born on 24 August 1936, as the second of four children, to P.V. Sreenivasa Iyer and Lakshmi Ammal in Tirunelveli district. Losing her father at the tender age of two, she was raised by her grandparents. Twelve-year old Rugmini came to Tiruvananthapuram under the care of her maternal grandfather Harikesanallur Muthiah Bhagavatar and uncle Nellai Krishnamurthy. Her elder sister was married to Nellai Krishnamurthy who was a professor at the Swati Tirunal Academy. Rugmini was indeed fortunate to learn the rudiments of Carnatic music from the doyen Muthiah Bhagavatar, who foresaw the potential of a musician in her. As a child, she was naturally attracted to Carnatic music as she was constantly exposed to the music classes conducted by her uncle and the musical discussions in the house of her grandfather. She joined the Swati Tirunal Music Academy (later named the Swati Tirunal College of Music) when she was thirteen, to pursue the Ganabhooshanam (vocal) course with veena as an allied subject. She was fortunate to be under the tutelage of Semmangudi Srinivasa Iyer, K.R. Kumaraswamy Iyer for vocal and K.S. Naryanaswamy, K.K. Sivaraman for veena. She learnt several compositions of the music trinity, Gopalakrishna Bharati, Papanasam Sivan, Swati Tirunal, Arunagirinathar and Purandaradasa, from these legends in their original pathantarams.

Musiri Subramania Iyer, who came as examiner for the second year public examinations, was so impressed after hearing Rugmini play the Kambhoji geetam on the veena, that he recommended she be promoted directly to the fifth year! That was a turning point in her life—to become a vainika. She passed Ganabhooshanam in veena with a first class… read more

A time to relook and relish the music

A tribute to unsung heroes
Scroll to top