SAVAL-JAVAB – A series of interviews with musicians and dancers

Concertgoers during the 1930s and 1960s would have encountered “full-bench” Carnatic music concerts, which included violin, mridangam, ghatam, khanjira and konnakol artists on stage apart from the vocalist. Concerts went on for about four to five hours and the tani avartanam alone was played for about 45 minutes. Konnakol is the art of vocalising rhythmic syllables, and konnakol wizards like Mannargudi Pakkiria Pillai, Mannargudi Vaidyalingam Pillai, Vellore Gopalachariar, Mannargudi Arumugam Pillai, Tiruvarur Nagarajan and Dharmapuram Abhiramasundaram Pillai ruled the rhythm world with their inimitable konnakol styles and had a huge following. Not to mention vidwans T.K. Murthy and T.H. Subhashchandran of our times who have been teaching konnakol (apart from other percussion instruments) to students. 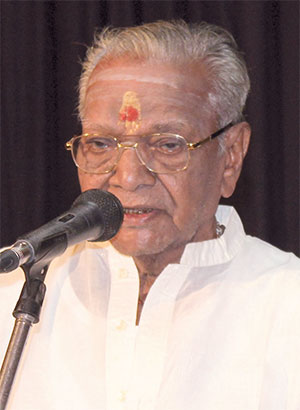 Among konnakol giants, Trichy R. Thayumanavar is a living legend who has carved a niche for himself in the realm of Carnatic rhythm. He is 86 and has done yeoman service by enriching the art with his expertise in mridangam, khanjira and konnakol. He keeps himself fit by practising yoga, swimming and floating in the water in order to improve his focus and concentration. You must listen to his konnakol renditions to realise his artistry, especially the expressions in his recitation of “ta dhi ta ka jo nu tam” with accents on dhi and jo which make you aware of the aesthetics of the lilt in rhythmic expressions. He has made several improvisations and has adapted various teaching techniques to popularise the concept of konnakol in concerts and also in percussion ensembles.

He holds “A-top” ranking in both mridangam and konnakol with an “A grade” in khanjira in All India Radio. He received the title of Vadya Padmam a few years ago from the Brahma Gana Sabha, Chennai. This season, Kartik Fine Arts honoured Trichy Thayumanavar with the Dr. Seerkazhi Govindarajan Memorial Award… read more

The ethical mridangam
Scroll to top