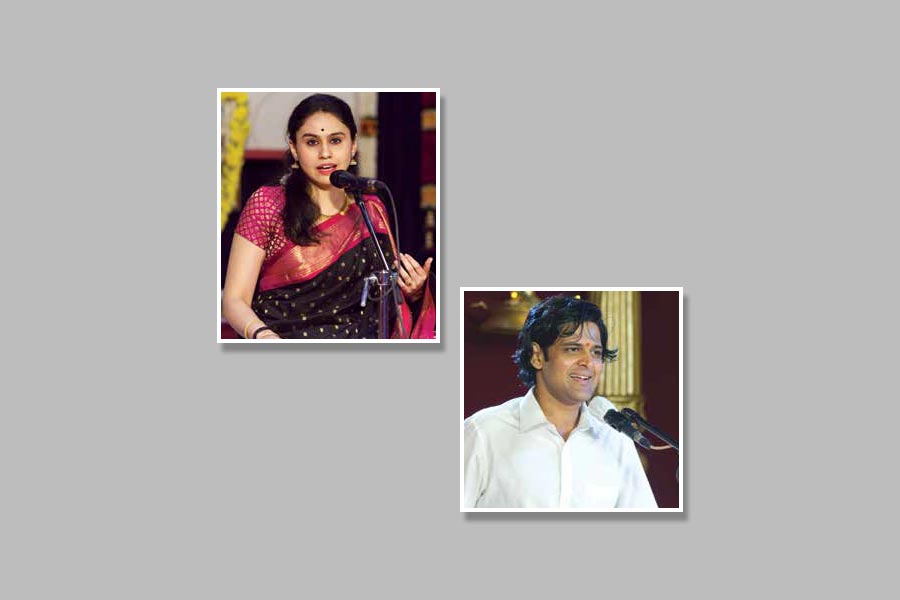 Impressive show by the young brigade

A hybrid season in 2021-22 provided good opportunities to musicians to present in-person concerts besides the virtual ones, and the musicians offered impressive performances in many venues. Here we focus mainly on the performances of up-and-coming musicians—on both virtual and live platforms— conducted by different organisations.

Mudhra organised its month-long virtual season during December 2021. Concerts were recorded in the newly refurbished Mudhra studio sans audience and were telecast over Paalam TV every day from 5.30 pm. Live concerts of two-and-a-half hours and more featured a mix of today’s stars, emerging talents, and the Mudhra’s Cutchery Competition title winners. Most of the concerts conformed to appreciable standards, were webcast free, and interested rasikas could voluntarily make donations. Impeccable audio, video, and the support of top pakkavadyam artists made the concerts an enjoyable experience.

Kalyanapuram Aravind aka Aravind Sounderrajan (see front cover), a disciple of vidwan Madurai T.N. Seshagopalan, has a pliable voice that can negotiate three octaves with consummate ease. Aravind’s sruti suddham, impressive manodharma, repertoire, and camaraderie with pakkavadyam artists—all contributed to the success of his concert. The systematic development of Bhairavi along its glides, for the central piece was a joyful experience and Balagopala, the monumental composition of Muthuswami Dikshitar was presented in a relaxed kalapramanam. His imagination in the madhya and tara sthayis was impressive, even as he traversed the octaves with ease and confidence. The niraval taken up on an unusual line—Vainika gayaka Guruguha nuta was handled with aplomb. The layacentric kalpanaswaram with kuraippu at the rishabha was executed with precision.

In the first half of the concert, the alapana of Poorvikalyani stole the show for the kriti Ekkalatilum composed by Tiruvarur Ramaswamy Pillai. Aravind, with a voice marked with a good range, brilliant brigas and rounded gamakas, presented an alluring picture of Poorvikalyani. Alapana of Sree raga can be a tricky affair, but Aravind rendered it with diligence, and the Dikshitar kriti Sree Varalakshmi was presented in a leisurely tempo, appended with kalpanaswaram… read more