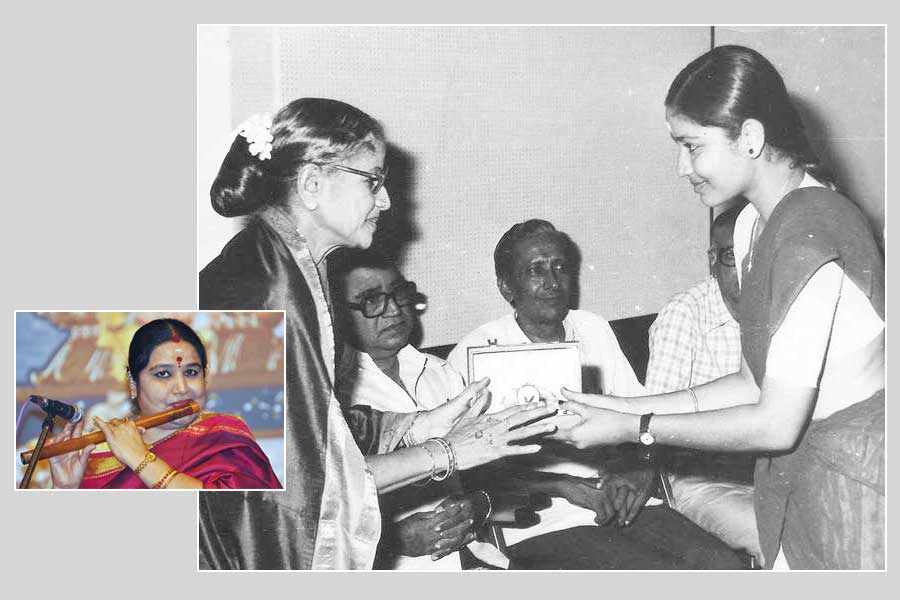 Flautist in the making

Sikkil Mala, the daughter of Sikkil Neela, is the torchbearer of the bani of the famed flautist duo – the Sikkil Sisters, Sangita Kalanidhis Kunjumani and Neela. Mala’s journey with the flute, did not begin purposefully as the heir apparent of the flute lineage of her family, but in a very casual manner. Since there was so much music and flute being played around her, she naturally gravitated towards it and her mother taught her further. Mala, by her own admission, was quite a playful child, interested in a lot of handwork, painting and drawing. Her progress in music was gradual but little. She recalls with a chuckle that she would listen to her mother and aunt’s concerts, eagerly waiting for them to play the mangalam, so that she could then go and hug her mother and be with her!

When she was about 15 years old, Mala once made a remark about someone’s flute recital, which stunned her mother. It triggered in her the feeling that Mala should be taught in a more rigorous and focussed manner to play the flute, as the teenager had the capability to appreciate the nuances. Mala used to keep tala perfectly and repeat the songs well, thus gaining the appreciation of the co-artists of the Sikkil Sisters who felt that Mala could blossom into a well-trained flautist. Very often they would ask Neela why she should not train her daughter to become a performer.

Thus began Mala’s focussed training, and her repertoire was soon built up with songs like Vatapi Ganapatim, Manavyalakimchara, Bantureeti and so on. Her first step was to master the compositions of Tyagaraja and also songs that were suited for the flute. Mala was driven by the determination to do well and she challenged herself to master the instrument. She participated in many inter-school and inter-collegiate competitions as a student and gained experience in public performance. This helped her shed her inhibitions and built her confidence as a stage performer, also giving her the chance to expand her repertoire… read more