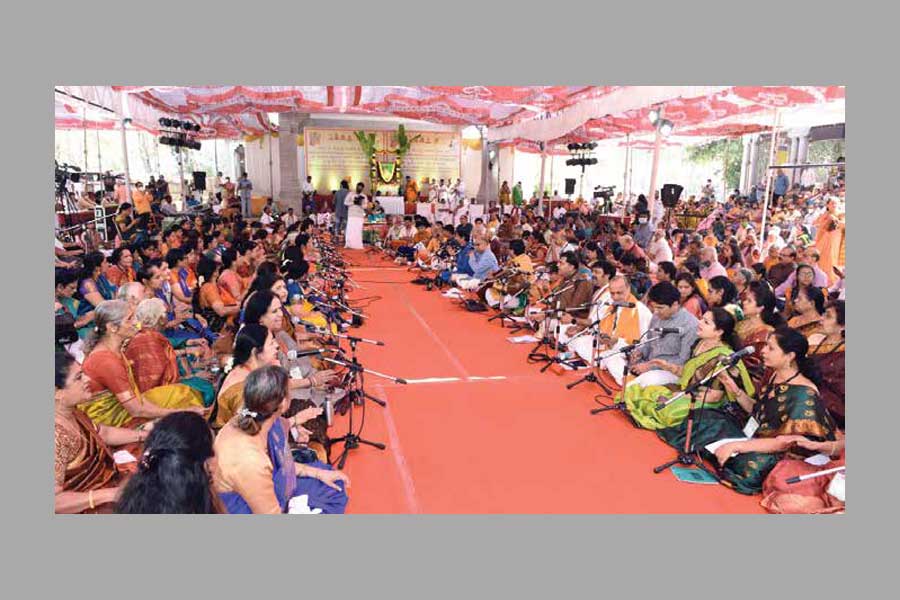 Music lovers of Bengaluru heaved a sigh of relief when they were informed of the five-day live music festival, from 29 January 2021. Sangeeta rasikas of the city were bored without in-person concerts due to the pandemic, and the announcement of the festival was received with enthusiasm. The festival was organised by the Sadguru Tyagaraja Aradhana Kainkarya Trust of Bengaluru. The Trust had been hosting a vidwat sabha along with religious programmes and honouring scholars, during the aradhana at Tiruvaiyaru for many years. The Bengaluru based Trust shifted the annual festival activities to the city last year. This year, with the active cooperation of senior musicians, Nagamani Srinath and Suma Sudheendra, the five-day music festival was added to the morning religious functions. The music festival featured two stages (sideby-side) organised in the spacious quadrangle of the Sringeri Sankara Mutt. The stage, flanked by Goddess Saraswati and the Sankaracharya on either side, provided an auspicious ambience to the musical samaradhane of Tyagaraja’s kritis. Popular and senior musicians from Karnataka were featured and were allotted 20-minute slots between 5 pm and 9 pm, except on the inaugural day. The music festival was inaugurated by V.R. Gowrishankar, CEO and Administrator of Sringeri Sharada Peetham, preceded by nagaswaram by Prabhavati and Palanivel.

The music festival was a huge success as a large number of people attended the concerts featuring only Tyagaraja compositions. The performances featuring both vocal and instrumental, were broadcast live by the AIR FM channel Amritavarshini, and live streaming of the concerts and the Pancharatna kriti goshtigana, by Sri Sankara TV. The festival, consisted of 12 main artists who were either A-Top, A or B-high grade artists of All India Radio. Pancharatna kritis goshtigana Since it was being relayed by AIR, only graded artists were featured in the 20-minute slots. They performed on four evenings, and maintained strict adherence to the time slots. The concluding day witnessed the group rendering of Tyagaraja’s Pancharatna kritis by senior musicians of Karnataka, which was followed by prasada viniyoga… read more