‘Rise’, by A Carnatic Quartet

a lockdown video experience of song, illustration and the spoken word

'Rise', by A Carnatic Quartet, is a lockdown production that has been created as a reflection of the human spirit, especially in these last months.

The artistes of the Quartet, speak to you, before each piece, sharing why they’ve chosen to present that particular piece and how it connects with their personal lockdown experiences. Alongside these songs, feature quotes from several world philosophies, that explore these connections further. Each quote has also been given an original visual interpretation, by ace illustrator, musician and artiste Susha.

'Rise' is a 1 hr 15 min, Classical music production, that has been planned and executed from start to finish remotely. All of the music that you will listen to and all of the visuals that you will watch in this product, have been independently recorded and shot by each of the artistes in their own homes, with whatever equipment they have had access to, under complete lockdown, and then been woven together digitally to present this unique multimedia production.

This quartet has been conceptualised as an effort to explore the coming together of two distinct instrumental artforms, within the Carnatic tradition. The melodic instruments in this collaboration, violin and nagaswaram, come from very different cultural and musical backgrounds, and similar is the case with the mridangam and thavil. The intent is to explore each of these instruments, as also the musical traditions from which they come, without restriction, and to witness the magic that happens when they come together.

Each performance is crafted keeping in mind the musical and sonic uniqueness of the four instruments, and their coming together in both composition and manodharma. Every listener so has something special to take back with them, be it a Mallari, a Bhairavi swarajati, a lilting tillana, a folk song (Kavadi) or even an old film song. This collaboration, more than anything else, is the coming together of four artistes in simply, a celebration of instrumental music.

Shreya Devnath
Shreya Devnath is a student of the legendary Sri Lalgudi Jayaraman. She is awell- established solo violinist, who also curates, performs and tours with “A Carnatic Quartet”, a Carnatic instrumental ensemble, as also “An Experiment with Sound and Music”, a duet with percussionist Praveen Sparsh. A capable vocalist, and committed teacher, Shreya handles students from different parts of the world. She has toured the US and UK extensively, as also Australia, Singapore, Malaysia, Indonesia, Sri Lanka and Dubai for concerts and workshops. She has scored and performed music for plays, ad jingles and short films. Shreya has also created music outreach programs for underprivileged children, with the intent of spreading the joy of music far, wide and deep. Her music is characterised by substance and freshness, a journey for the artiste and the audience.

Praveen Sparsh
Praveen Sparsh is one of the most sought after Mridangam exponents in the field of Carnatic music today. Having trained in the mridangam under Guruvayur Sri Dorai from the age of five, Praveen is now also a multi percussionist and a music producer who has scored and performed music for plays, ad jingles and short films. He has toured the United States extensively, as also, countries like Luxembourg, Germany, Belgium, France, Amsterdam, Singapore, Malaysia, Srilanka, Jakarta, Sydney, Melbourne, Israel and Palestine. Praveen’s perception of music is as nuanced as it is precise, and his boundless artistic curiosity reflects in his wide array of musical explorations.

Mylai M.Karthikeyan
Mylai M Karthikeyan is a young torchbearer of the Nadaswaram tradition. He started learning Nadaswaram at the age of eight from his father Mylai Sri S.Mohanraj, and then proceeded to learn from Nadaswaram Vidwan Mylai Sri Rajendran, at the age of ten. He then joined the Adyar Music College, and went on to complete his Diploma in Nadaswaram under Nadaswaram Vidwan Vysarpadi Sri G. Kothandaraman. He remains under the tutelage of Sri Vysarpadi Kothandaraman, with a view to further enhance his skills. Karthikeyan completed his Diploma from Adyar Music College, as a Gold Medallist. He was subsequently awarded the title “Vaadya Visaaradha”. He has also been awarded the titles of “Vaadhya Kalaimani” and “Nadaswara Eilaval”.

Adyar G Silambarasan
Adyar G Silambarasan is a leading Thavil artist today. He had his debut at the age of fifteen and went on to complete his “Vadya Kalaimani” in Tavil, from the Tamil Nadu Government Music College, where he was a Gold Medalist. During this period, he had the opportunity to learn from renowned Tavil vidwans, Kalaimamani Thirukannauram S. Jeya Chandran, Kalaimamani Thirunageswaram T.R. Subramaniam and Kalaimamani Mannargudi M.R. Vasudevan. Silambarasan currently plays for Tamilnadu Government Music & Fine Arts University, Tamilnadu Government Music College, Kanchipuram Music School, Erode Music School and Madurai Raja Annamalai University, apart from many of the prominent music organisations of Chennai. He is the recipient of many awards, including the Govt. Music College – Vadya Visaradha (2007- 2010), Vadya Kalaimani (2013-15), Kanchi Kamakoti Peeta Asthana Vidwan (2018), Sree Sangeetha Seva Rathna (2016) and Tavil Ilaval (2018).

Gummudipoondi R Jeevanandham
Gummudipoondi R Jeevanandham is a well regarded Tavil artiste, and a disciple of Gurus Sri Sozhavaram Nathan and Sri Vetharanyam V.G.Balasupramaniyam. He has completed his Music Diploma in Raja Annamalai Mandram, earning the title Vaadya Visaaradha upon completion. He has also been awarded the title of Sangeetha Seva Rathna. Jeeva is a ‘B High’ graded artiste of the All India Radio.

Susha
Susha is a musician and visual artist. Introduced to music at the age of 5, and trained with some of the most respected Carnatic music Gurus, she then went on to do a Masters in Jazz Performance, at the University of Toronto. She also did her BA Fine Arts at Stella Maris, Chennai, as also a certificate course named ‘The Survey of Art Therapy’, conducted by George Washington University, in collaboration with Stella Maris, and then a masters degree in Media Management at MOP Vaishnav, Chennai.

Her main interest lies in cross-disciplinary work, especially with the performance, film, and visual media. She travels and collaborates with artists from around the world, exploring different ways to integrate her musical career with her passion for visual design and communication. She also works as a music composer and has scored music for feature films, dance performances, advertisements, and short films, and in the design world, she works as an illustrator, graphic designer, and model. 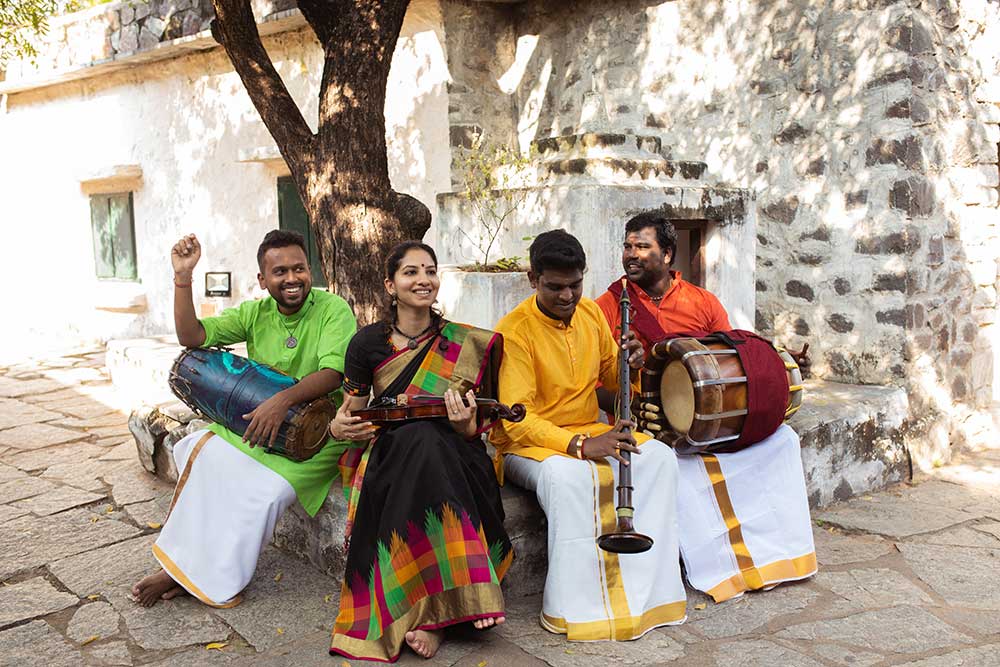 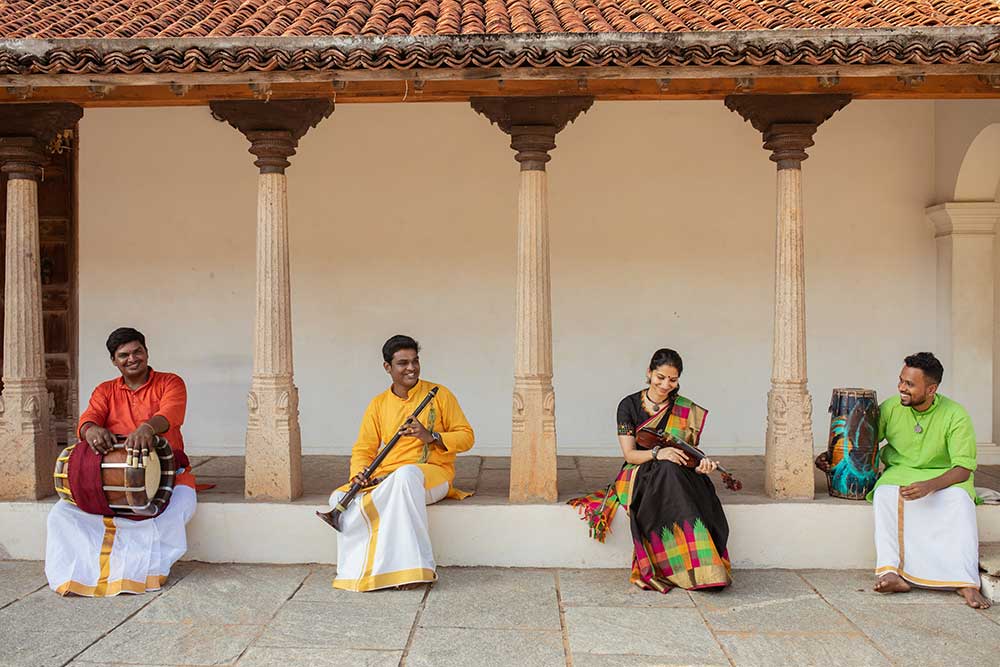 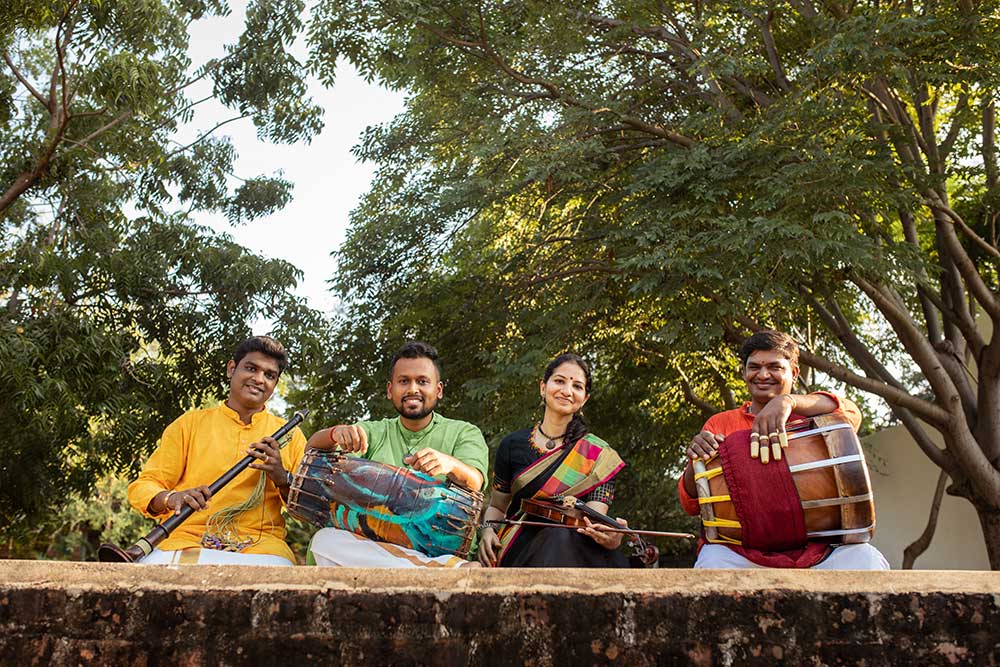