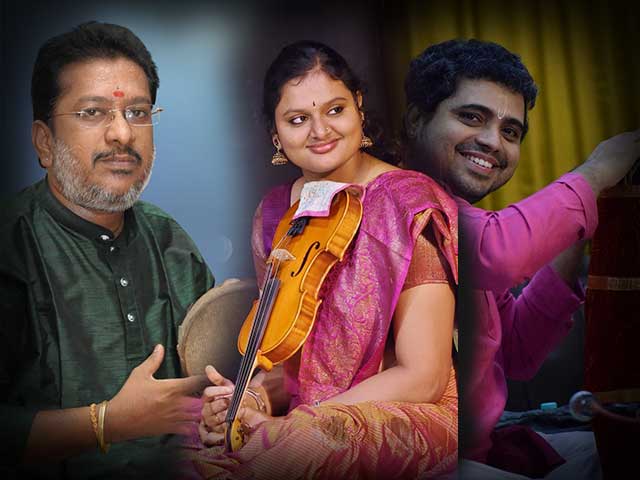 The poet Gopalakrishna Bharathi (1810-1896) was a contemporary of Tyagaraja whom he is said to have met. A great bhakta (devotee) of Siva, Gopalakrishna Bharati has left to us a number of wonderful compositions extolling the beauty, the grace and the majesty of Siva in his many forms. Nandanar Charitram contains a number of such songs woven into a moving story of the many hardships faced by Nandanar and by extension by all who suffer oppression. His timeless message, is particularly appropriate today. The students of Dhvani Music School proudly present this program where the music and lyrics of Gopalakrishna Bharathi speak to us and remind us of our duty to fellow humans.

Gopalakrishna Bharathi was born at Narimanam, near Nagapattinam. He spent his early days in Mudikondan village, near Thiruvarur. A few years later he moved to Anandathandavapuram village, near Mayavaram where he lived almost his entire life. His father, grandfather, and great-grandfather were all veena exponents and scholars in Sanskrit. After losing his parents at an early age, he worked as a cook in a temple. He then met Govinda Yati, who taught him Hindu scripture, and then the musician Ramdas, who taught him Hindustani music. Gopalakrishna started his professional career after finding a patron named Annu Iyer. (source Wikipedia)

At a time when Telugu flavored with Marathi styling was in vogue and Bhagavata Mela natakas and Yakshaganas were popular, Gopalakrishna Bharathi’s magnum opus, Nandanar Charitram, was a significant contribution to the Tamizh repertoire and became very popular. Legend has it that the composer was inspired to recount the story of Nandanar when he saw a sculpture of Nandan with a shovel at the Chidambaram temple. His music has a very intuitive appeal with very simple but captivating tunes both reflecting and inspiring Siva Bhakti. They also convey philosophical concepts in simple, unobtrusive words that have a broad reach and appeal.

K.P. Nandini, disciple of Smt. Lalitha Raghavan for violin and Smt. Ranjani Gayatri for vocal , is an ‘A’ grade artist of All India radio for both violin and vocal. She is also the daughter and disciple of Smt.Uma Prabhakar who is one among the singing duo, Mayavaram sisters.

She is a central government scholarship holder in both fields and is the recipient of titles such as ‘Yuva Kala bharati’, ‘Gaana sarasawathi’, ‘Kalaimani’, ‘ Bala kala rathna’ etc. She is the title winner of the carnatic reality show ‘Tanishq Swarna sangeetham’ conducted by Raj TV and was awarded a cash prize of 5 lakhs and the title ‘ Golden voice of the season’. She has also received the prestigious ‘Kalavanta’ award for the year 2019, a national level concert competition organised by KFAC, Karnataka.

She has had the rare privilege of performing before the president of India Dr. APJ Abdul kalam at Rashtrapathi Bhavan and in the August presence of the princess of Spain. She has extensively toured US and Europe for performances in both capacities.

Born in Kumbakonam (Peralam- a small nearby village), a city well known for its rich musical tradition, Arjun Ganesh is a versatile and renowned Mridangam artiste in the field of Carnatic music. Melody , impeccable playing for the compositions and aesthetic Mathematics characterize Arjun Ganesh’s Mridangam Playing. A much sought after artiste. He is the disciple of Legendary
Mridanga Vidwan. Poongulam. Sri.R.Sabesa Iyer, who developed the Thiruvarur Bani (Method). Many of his students are becoming well known in the performance circuit. He is also an A graded artiste of All India Radio and Doordarshan and has been performing for the past 3 decades.

Today, Arjun is one of the most sought after artists of his generation. He has been fortunate to accompany some of the senior most artists in the field such as Sri.TK.Govinda Rao, Dr. M. Balamuralikrishna, Sri. T. V. Gopalakrishnan, Sri. T. V. Sankara-narayanan, Sri. O.S. Thyagarajan, Sri. Sanjay Subrahmanyan, Prince Sri. Rama Varma, Smt. Aruna Sairam, Malladi Brothers, Neyveli Sri.R.Santhanagopalan, Smt.S. Sowmya and Smt. Visaka Hari, Sri Unni Krishnan, Sri.O.S.Arun, Sri. Sikkil Gurucharan and others. He has also performed in prestigious venues in India and abroad, and has successfully completed concert tours all over the world.

In addition to his career as a performing artiste, Arjun Ganesh is the founder of LAYA- AALAYA Mridangam School imparting mridangam knowledge for more than sixty students over past fifteen years in Chennai. He has received the praise of rasikas and critics alike allover.

Papanasam S. Sethuraman is a well known Ganjira Artiste who has been performing the art for more than 30 years.

Born in the year 1969 to Sangeetha Vidwan Sri P. Subramanian at Papanasam in the district of Tirunelveli, Tamilnadu, Sethuraman showed keen interest for percussion music from a very young age and started learning Thavil initially. It was at the instance of renowned Ganjira Maestro Kalaimamani Mayavaram G. Somasundaram (late), he started playing Ganjira completely.

Sethuraman learnt the art of playing Ganjira devotedly from his guru for nearly 30 years and his dedication and Guru Bhakti made him one of the successful performers in the classical music field.

Papanasam S. Sethuraman accompanied Violin Virtuoso Dr. L. Subramaniam in a music show held in Bangalore, India, as part of the Miss World contest. He also had the opportunity to perform with world renowned Guitarist John Mclaughlin and renowned drummer DrilloKruth at the Reunion in the year 1992.