A tale of lost souls from the Mahabharata

Many of us are familiar with the tales of Mahabharata. The famous epic has been made into movies and daily soap operas for the longest time. Reinterpreting an episode from the series, Chennai-based Gowri Ramnarayan presents When Things Fall Apart, a tale of lost souls from the Mahabharata. The story focuses on three characters — Dronacharya or Drona, Ashwathama, and Kripi.

What differentiates this play from the regular episodes of Mahabharata, Gowri explains, is that “The play is divided into four scenes, and we all know about Drona, that he was the great mentor. However, my play questions his actions and thoughts. Why does he take the side of Duryodhana? Apart from that, Ashwathama, his son, who was also fond of the Pandavas, winds up on Duryodhana’s side. There is something unclear about the father-son duo and also, there is nothing much mentioned about his wife, Kripi. There is just a routine reference or two about her. This gave me an opportunity to create a new character.”

About how the play unfolds, she says, “This is an ordinary family, living in a time when the cosmos is crumbling around them. Kurukshetra is around the bend, and the play explains how they dealt with the tremendous disasters and all the terrible acts that were happening, which they were also a part of. It also asks questions if their actions were right or wrong.”

Gowri insists that the tale from the Mahabharata, about Drona and Ashwathama, remains eminently relatable. “When I was writing the play, I felt that the problems and the dilemma they face are very relevant today. Whose side do you choose? What is my duty? What should I do? These questions are still unanswered,” she concludes.
– INDIAN EXPRESS, Jan 2018

Foreword to WHEN THINGS FALL APART

The empty spaces in our myths are an ever present temptation to novelists, playwrights and poets to step in and fill them. Their retellings and re-interpretations bring with them a contemporary perspective, often hinging on ideas and issues of the day. For if they did not, why go there at all? However, it is only a skilled writer, also one who has a sound knowledge of the original, who can ensure that the new interpretations hold true without becoming anachronistic in the context of the original. Gowri Ramnarayan is one such writer. In “When Things Fall Apart”, she looks at Drona, Kripi and Ashwatthama as a somewhat dysfunctional family of the modern kind without their becoming unbelievable in the context of the Mahabharata. It is the strong connection between the one and the other that amplifies the myth and lends substance to the interpretation.

We know Drona well. He has trained the Pandavas and Kauravas in the skills of war, which they ultimately use to destroy each other on the battlefield of Kurukshetra. We know that, before he became Dronacharya, he was a poor Brahmin living on alms, unable to afford cow’s milk for his beloved son Ashwatthama. His wife Kripi would give the child rice flour mixed with water instead. This hurt him enough for him to go against his dharma to seek material betterment at King Dhritarashtra’s court. We know Drona also as the jealous, irascible teacher who asks Ekalavya for his thumb as guru dakshina in order to prevent him from becoming a better archer than his star pupil, Arjuna. If you take Drona by himself then, these stories and his conduct on the battlefield make for a well contoured picture. If an empty space is to be found at all, it is in the lack of explanation for his silence at court when Draupadi is being publicly stripped. Ramnarayan steps adroitly into this space and fills it up.

Kripi on the other hand, is almost all empty space. We only know that she was abandoned in the forest with her brother Kripa, and they were found and brought up by King Shantanu. It is true of both the Mahabharata and the Ramayana, that women characters who do not influence men’s actions directly, as do Draupadi and Sita, remain in the shadows. For instance we do not know how Urmila felt when Laxman abandoned her for fourteen years to accompany Rama and Sita into the forest. Disturbed by Valmiki’s neglect of this character, the eminent Marathi playwright B. V. Warerkar wrote “Bhoomikanya Sita” in which Urmila spoke at length about her hurt and anger at not being allowed to accompany Laxman to the forest.

Ramnarayan does something similar in “When Things Fall Apart”. She fleshes out Kripi, turning her into a strong, independent-minded woman who becomes the moral centre of the play. Kripi stands for peace, demands respect for women and the environment and condemns the destructive forces that men’s overweening, yet fragile egos let loose upon the earth. A relationship is thus created between husband and wife where none existed. Simultaneously, Ramnarayan gives a new twist to the relationship between father and son taking off from Drona’s only too obvious bias towards Arjuna.

Of the three protagonists of the play, Drona offers the greatest resistance to being reimagined. His contours are so clearly drawn in the Mahabharata through action and event that the writer must of necessity confine herself to them in her interpretation. Ramnarayan therefore turns to his motivations, to the inner impulses that have driven him to his actions. In the process, she creates a character who is conscious of the wrongs he has done but is not honest enough to see them as moral flaws in his character. Instead, he does what every skin-saving human being would do –offers specious reasons for his acts. But he gets caught up in the twisted coils of his logic and ends up emotionally exhausted. Drona in the Mahabharata is clever, powerful and even cruel. In Ramnarayan’s play, he is weak and pathetic with practically no saving grace.

With such a father, it is easy to imagine Ashwatthama disrespecting him. The young man’s language is aggressive, his unmitigated anger bordering on hatred. However, there is a scene in the play which tells a gentler story. In this scene, Drona pities his lot. “And my son,” he laments. “Will he ever stop seeing me as his enemy? Will he every hold my hand as a friend?” Saying this, he falls into an exhausted sleep. Ashwatthama enters, sees his father’s lonely, uncovered body, goes indoors to fetch a blanket and covers him. With this touch, the writer adds a humanising layer to the father-son relationship.

Kripi is a good human being, a strong woman with a moral compass that never wavers. In our cynical times we find it difficult to believe in someone who is always right. After realism took over novels and plays, only those characters who display shades of grey strike us as real. What saves Kripi in our eyes is the mischievous delight she takes in puncturing Drona’s defensive excuses. For example, Drona’s excuse for not speaking up during Draupadi’s disrobing is that he had to be silent because the king was silent. “I have eaten the king’s salt,” he whines. Kripi’s whiplash answer is, “Stop eating his salt.” After this comes a scene that will make feminists cheer. Kripi begins to disrobe herself. If she is nude by choice she says, “I can’t be stripped in public before honourable men.”

It is interesting to see how differently the lacuna in our knowledge of Kripi is filled by a male writer. Devdutt Pattanaik says in an article on Drona on his website, “Nothing is said in the epic of the relationship between Kripi and Drona. But one wonders if the foster daughter of a king resented her husband’s poverty.” The implication is that Drona may have been prompted by Kripi’s needling to ask his old friend King Drupad for help.

Ramnarayan on the other hand ascribes Drona’s wish for material betterment to his own earthly ambitions and to the belief that a man has only to buy his wife a diamond to win her love. In the last episode of the play Drona says, “I wanted to make you proud of me, proud of my success, achievements, conquests. You never saw my love. You always thought the worst of me. You wanted me to remain poor, unknown, roaming in the forest, eating fruit, wearing tree bark. You thought that was noble. I didn’t. I wanted fame, glory, splendor, wealth, crowned heads bowing to me – in a palace, not a cowshed.”

As you read “When Things Fall Apart”, you realize it is not merely a well-written play. It is a fully realized piece of writing for the theatre. Ramnarayan is that rare thing, a writer-director who combines the two parts of herself so seamlessly that you are not sure whether her visualisation of a play comes before the writing or whether they happen simultaneously. Perhaps the act of writing is itself an act of visualization. She writes what she sees. And hears. 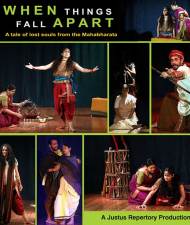 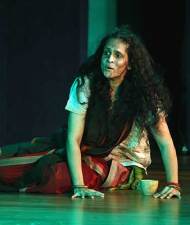 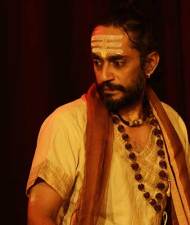 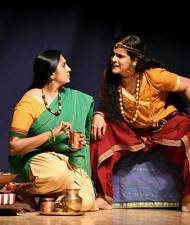 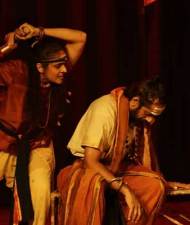 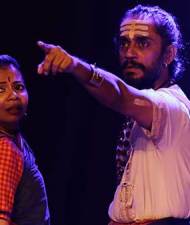 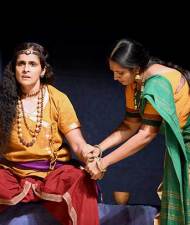 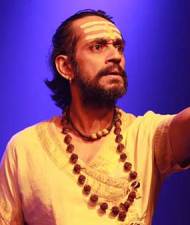 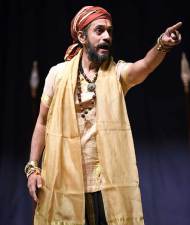 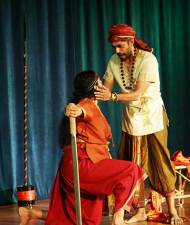 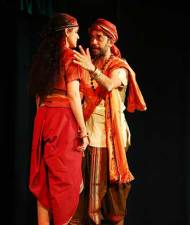 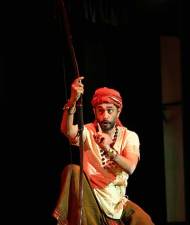 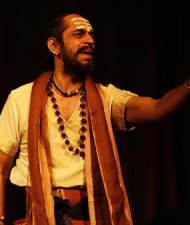 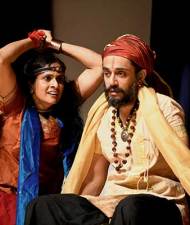 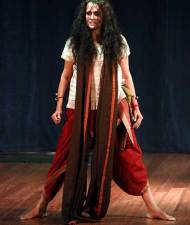 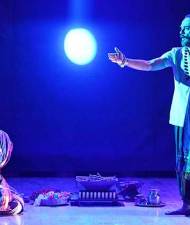 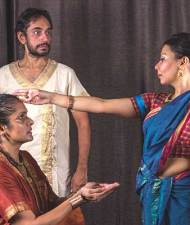 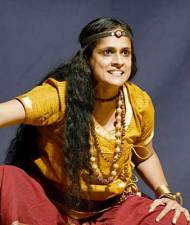 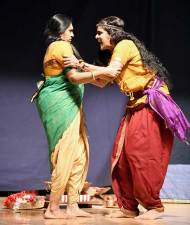 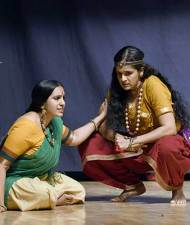