You are here: Home1 / Events2 / THE JUDGES CONCERT3 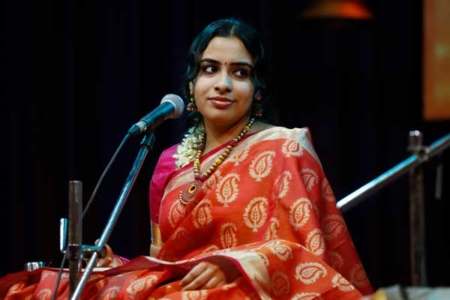 Krithika Natarajan had her initial training under Dr. Manjula Sriram and later under Sri Lalgudi G.Jayaraman. She is currently under the tutelage of Smt.Ranjani and Smt.Gayatri. She is an A graded artist from the All India Radio, Chennai and has performed in many prestigious venues in India and abroad. She has a lot of accolades to her credit and has been featured in various TV channels and in newspapers. Apart from being a performing vocalist, she also trains many students across the globe. Academically she is an MBA graduate, currently pursuing music full time. 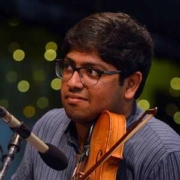 Rajeev Mukundan began his violin lessons with Shri N.Govindarajan at a very young age. He is currently receiving advanced training from Sangeetha Kalanidhi A.Kanyakumari and has been under able guidance for over a decade. He is an ‘A’-grade artiste of the All India Radio. He has received numerous awards from prestigious organizations around the world. Rajeev has travelled extensively on concerts, both in India and abroad. He has given many violin duet concerts with his Guru A.Kanyakumari, and has also accompanied many senior artistes. He has been a part of many unique jugalbandis and musical collaborations. 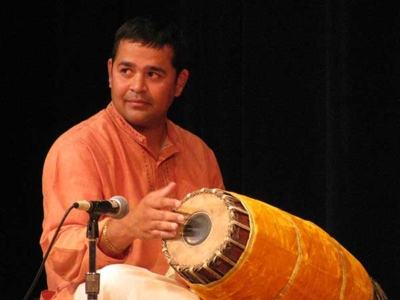 Vinod Seetharaman is among the most accomplished and sought after first generation Carnatic percussionists in the United States. His Mridangam performances have won him wide appreciation from audiences. His training in Mridangam started at the age of seven from Shri. Ardhanareeswaran, and he continues his advanced training from Bangalore Shri. Arjun Kumar and Shri. Umayalpuram Sivaraman. The purity and sophistication of Vinod’s mridangam training has enabled him to not only accompany an astonishing variety of musicians, but also given him the freedom to innovate and create meaningfully. Vinod has shared the stage with at least four generations of Carnatic musicians that includes Dr. M Balamuralikrishna, T N Seshagopalan, Dr. N Ramani, Chitravina Ravikiran, Neyveli Santhanagopalan Abhishek Raghuram, etc. Vinod is passionate about keeping up the purity of his traditional legacy even in collaborative ventures. He has composed and arranged the rhythm for many percussion ensembles. He is a popular teacher, and his students are regular features in music festivals and competitions. His vision is to work with a variety of musicians and propagate Indian percussion to diverse audiences across the globe. 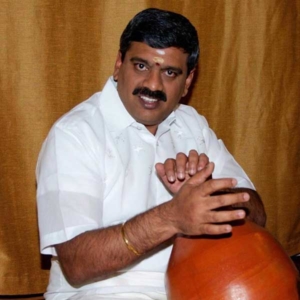 Balaji Chandran started his Carnatic percussion studies in Mridhangam under Sri.Kovai Mani and Sri. Kadayanallur Narayana Iyer. He is a disciple of Sri.Ghatam V.Suresh from whom he learns Ghatam. He brings with him an energetic style of playing the Ghatam bestowed upon him by his guru. He has provided his percussive support to many artists in America, Canada and in India. He has performed in prestigious venues like Music Academy – Chennai, Naradha Ghana Sabha, and other illustrious venues. He considers himself very fortunate to have had the opportunity to lend support to stalwarts and stars of current generation. He has been part of the Cleveland Aradhana festivities and Thyagaraja Aradhana celebrations in Minnesota, USA for the past 14 years. He has been featured in TPT Television and KFAI Radio. He has collaborated with St.Olaf Collage Jazz band and “Brass Kings” an American Blue Grass Jazz band. He is also adept in playing the Kanjira and Morsing. He has also lent percussive support to many Bharathanatyam Arengetrams and dance productions.