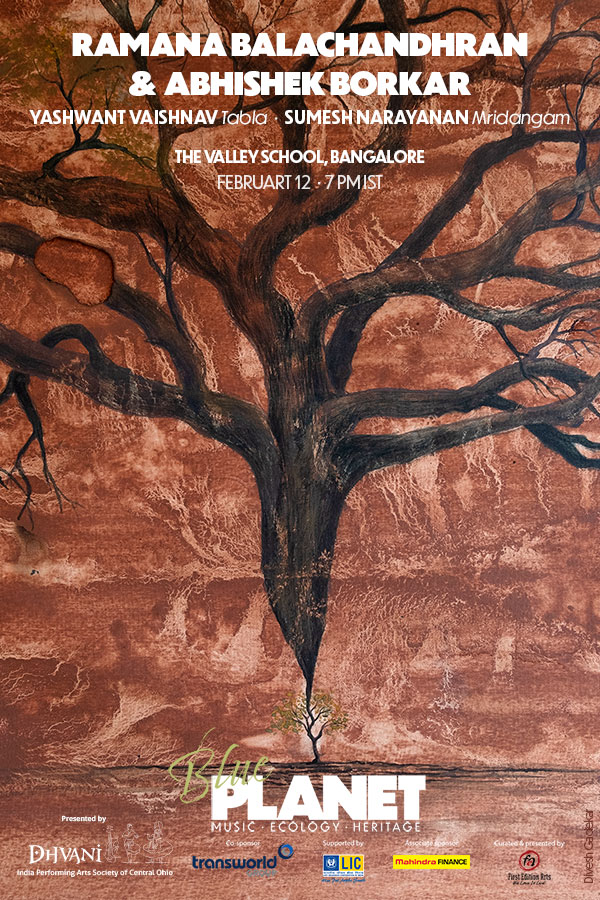 A young and versatile musician, Abhishek Borkar was drawn to the sound of the sarod from a very early age. Born into a musically rich environment in Pune, he initially underwent training in vocal and tabla at age four, before anchoring himself on the sarod, under the tutelage of his father and Guru Pt. Shekhar Borkar of the Maihar Senia Gharana. Rigorous and intensive training followed. Today, Abhishek is known as one of the foremost musicians in his generation. His natural instinct for aesthetic music coupled with impeccable control over sur and laya has enthralled audiences in various parts of India and abroad.

Widely acknowledged as one of the most brilliant and sought-after tabla artists of his generation, Yashwant Vaishnav began his training very early. Initial learning at age 3 began with his father and Guru Shri Rajendra Vaishnav followed by training under Dr. Hemant Sachdeva and Pandit Mukund Bhale for over a decade. Presently, he is under the tutelage of the Punjab gharana Maestro Pt Yogesh Samsi. His tabla playing is known for its high level of maturity as well as a perfect balance in the interplay of power and subtlety.

Ramana Balachandran, is a Vainika in the Carnatic music tradition. His prodigious talent was noticed when he was able to identify ragas and point out nuances at a very young age. He has been performing since the age of 12 and his music has always been simultaneously deep, subtle, complex, and emotive. Ramana started learning vocal music with his mother Sharanya Balachandran. He then learned Veena under Vidushi B Nagalakshmi (granddaughter of Karaikudi Sri Subbarama Iyer) for a period of three years and continues under his father Sri Balachandran. He also pursued Vocal from Sangita Kala Acharya, Smt. Neela Ramgopal, and Mridangam from Laya Kala Pratibha Mani, Sri Ranganatha Chakravarthy. Ramana has performed over 350 solo veena concerts in and outside India. His music and artistry is a sublime experience for rasikas across the board.

One of the most gifted and sought-after Carnatic percussionists of the current generation, Sumesh Narayanan has trained with Mridangam Maestro Dr Thiruvaarur Bakhtavathsalam for two decades and continues to learn from him. Sumesh is a rare combination of a musician who has mastered the traditional corpus of the mridangam in the Carnatic style while retaining an open and larger world view which allows him to be part of many innovative and cross-disciplinary ventures. He is a vital contributor to these and much admired for his musical ideas and energetic playing

Symphony of Emotions
Scroll to top