You are here: Home1 / Blog2 / Conversations3 / 70 Years Young; an interview with C.V. Chandrasekhar

The eminent Bharatanatyam dancer, choreographer, composer and teacher Prof. C.V. Chandrasekhar shared his memories as we were seated at the Kalakshetra auditorium with his dancer wife Jaya, waiting to watch the program of the evening. “You know I am 70 years old, don’t you,” he says with a wide smile and a chuckle. 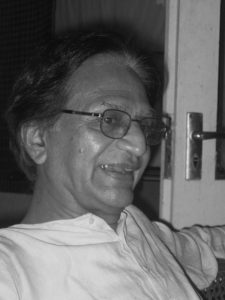 Professor Chandrasekhar and his daughters Chithra and Manjari will perform a full Bharatanatyam program at the 2004 Cleveland Thyagaraja Aradhana during the prime Sunday evening slot on April 11th. The following morning they will conduct a lecture-demonstration on Nritta and the salient features of dance music. The lec-dem promises to be a compelling event for teachers, dancers, students and aficionados.

He reminisces about his interest in Bharatanatyam even as a child. At the age of six he would do the Bhairavi piece “Velavare” for anyone who asked to see him dance. He also recalls an incident when M S Subbulakshmi came to Delhi. The Sadasivams visited his family home with their daughter Radha. The eight-year-old Chandrasekhar was brought out to show his musical talent. Learning of his interest in dance, young Radha teaches him “KandadUndo Kannan Pol”. The memories bring a sparkle to his eyes and a warm smile lingers on his face.

His interest in Carnatic music lead him to Kalakshetra at Chennai in 1945 where his father, a civil servant in Delhi sent him to study music. Later, recognizing the young boy’s interest in Bharatanatyam, Rukmini Devi Arundale wrote to his father to ask if she could enroll him in the dance department. My father wrote her back saying “I leave him in your hands. You mould him,” recalls Chandrasekhar.

After his early training at Kalakshetra, Chandrasekhar goes on to complete Bachelor’s and Master’s degrees in science, teaches biology and English at a boarding school in Mussorie, and works on his PhD in Botany at Benares. But dance keeps calling out to him and reclaiming his spirit. He turns to lecturing in this art initially at the Benares Hindu University and later becomes a Professor at Baroda, the first University in India to have a full curriculum in dance. Now retired, he and his wife Jaya, also a student of Bharatanatyam in the Kalakshetra tradition, conduct courses and workshops as well as teach.

Known for his adherence to the traditional Kalakshetra forms, Chandrasekhar says he has, over the years, both consciously and by dint of his training tried to stay within the spirit of his early tutelage. “That is not to say I have not evolved, nor even that the Kalakshetra style has stayed the same,” he adds springing out of his chair to demonstrate aramandi and hand mudras.” It is important to know the difference between being stiff and being firm in form. Line, anga-shuddam and neatness as well as the aesthetics of movement are important.

His energy fills the room as he demonstrates and sings familiar lines as well as the words from two of his own compositions in Tamil; thillanas set to misra-triputa thalam and Adi thalam. His wife Jaya, a talent in her own right as a dancer and nattuvanar seems content to listen and occasionally correct a date or detail which Chandrasekhar forgets.

Gone with the devadasis