Ramaswami Iyer was a second-generation disciple in the Sishyaparampara of Saint Tyagaraja. A graduate of Madras University (FA), he served as a salt sub-inspector in the Rayalasima area. Attracted to Saint Tyagaraja’s music, he gave up his government position to undertake gurukulavasam under Wallajapet Krishnaswamy Bhagavatar and soon became his principal disciple. He subsequently also studied under Umayalpuram Krishna Bhagavatar and Sundara Bhagavatar.

In 1910 he published, at his own expense, the book Tyagarajasvami Kirtanangal under the nom-de-plume Kanchi Mahavidvan Ramananda Yogigal. This is the first known publication of Tyagaraja’s works in Tamil and this book is a part of the collection in the libarary of the Music Academy. He also published a book on Tyagaraja’s pancharatna kritis with notation.

Ramaswami Iyer shared his knowledge and expertise with whoever approached him. Sangita Kalanidhi Prof. P. Samabamurti was one his disciples. In 1925 Ramaswami Iyer was chosen to supervise the construction of Tyagaraja’s samadhi in Tiruvaiyaru. He devoted much of his last years to propagating lesser-known kirtanas of Tyagaraja.

He was not a performing musician though he is known to have participated in the Marghazhi bhajan groups in the madaveedhi’s of Mylapore where he is said to have frequently sung lesser known and rare kritis of Tyagaraja. He would also participate in expert discussions in the then nascent Music Academy, often correcting the singing of Tyagaraja krithis by the leading vidwans of the time. They would listen to him because of his stature. However, dissatisfied with what he perceived as deviation from tradition, he stopped participating later meetings.

After Ramaswami Iyer’s death in 1936, Prof. Sambamurthy made arrangements to provide his widow, Kamakshi Ammal, a monthly pension for the rest of her life.

One could well ask why there would be a memorial concert in San Diego for S.A. Ramaswami Iyer. The reason is quite simple. Ramaswami Iyer’s great grandson Subramanian Ramachandran makes his home here. He and his wife Revathi, herself the granddaughter of musicologist and Harikatha exponent Kallur Krishnamurthi Sastri, have sponsored this concert. Seeking to have a fitting tribute, they have personally invited Vidhushi Trivandrum Seethalakshmi to give this concert under the auspices of the Indian Fine Arts Association of San Diego.

In his brief introduction Subramanian notes, “When we look back at our collective ancestry, it is filled with extraordinary stories of personal sacrifice for the sake of various ideals – whether it be getting independence for India non-violently, or propagating traditional art forms for coming generations. Today, it gives me great pleasure and pride to remember my great grandfather Sri. S.A. Ramaswami Iyer whose contributions to Carnatic music were made with a lot of personal sacrifice and sacrifice by his family as well.”

There is still much to be learned about Ramaswami Iyer’s life. A conversation with his grandson, Prof. K.S. Ramachandran (Professor of Mathematics retd. Viveknanda College), who was six years of age when his grandfather died, suggests that the family is attempting to learn more about Ramaswami Iyer’s life. From the anecdotes he shared, it appears that Ramaswami Iyer was a talented and multi faceted personality whose life was stretched thin between government service and family obligations on the one hand, and a deep love of Tyagaraja’s music on the other. This came at some considerable cost to family life. With research and investigation, the family hopes to learn more about the details of his life and contributions.

For the weekend following the concert, San Diego took advantage of her visit by having Smt. Seethalakshmi conduct four workshops to teach Swathi Tirunal compositions to students of various age groups. These workshops were held at the home of Revathi Subramanian. Students of all ages and their parents attended and participated in these workshops.

On Nov 5 2010, San Diego music rasikas gathered at Neurosciences Auditorium to hear a concert by veteran musician-teacher Smt Trivandrum Seethalakshmi. And what a concert it turned out be! A few of us have known about her, having seen the YouTube broadcast of the now famous navaratri mandapam concert by Smt Parassala Ponnammal where Smt Seethalakshmi assisted by vocal support. Despite being Deepavali day on a Friday evening, there are a good 150 people in the audience and they stayed to hear a full three hour concert. 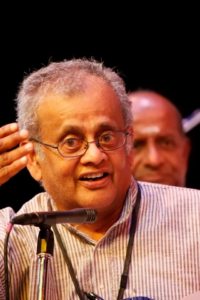 The concert started with a Tulasivanam composition bhajAmahE in hamsadhvani. It was immediately evident this will be a traditional carnatic concert in the best sampradAya. A bright vasanta followed with tyAgarAjA’s sitamma mayamma. Then came Tyagaraja’s masterpiece ElAvatAra in mukhAri. The alapana in mukhari was full of bhaava. The musician glided through the notes of mukhari effortlessly handling both dhaivatas, the alapana sequence climaxed with several sangatis ending in tAra sthayi rishbam; hearing this mukhari brings back memories of her guru, the inimitable Semmangudi Srinivasa Iyer.

The mukhari was followed by dharmavati alapana and Ambujam Krishna’s jAnaki vallabha. All sangatis very systematically rendered – one could learn this kriti just by listening to her rendering. That Smt. Seethalakshmi is a good teacher becomes very clear when one hears her kriti rendering. The kalpana svara was beautifully presented. The sequence of gg mm dd n ending in jAnaki was very soulfully rendered , bringing out the Dharmavati effectively.

Her style of kalapana svara rendering had an easy flow – concealing kaNakku complications since raga bhava was adhered to throughout.
Then came a very soothing Maravakave O Manasa in Sama followed by paramapurusham in lalitapancamam. For the latter composition, a crisp cittasvaram by GN sir was presented. A world class kambhoji alapana followed . Her singing was open throated and her akarams beautifully produced. As she developed the raga, it was clear that she was totally immersed in the music; singing the raga as if unaware of her surroundings. It gave the impression she was not performing for us. We were just witnesses.

It was appropriate that such an alapana was followed by a majestic O Rangasayi. Then we were treated to the slokam, sri raghavam dasarathatmajam aprameyam, in ragamalika. Her sloka rendering was very captivating. It was clearly one of the highlights of the concert. This followed by a surdas bhajan, a punnagavarali manipravalam by swati tirunal, AyE giridhar by Swathi Thirunal, a Thillana in Sankarabharanam, tungAthIra virAjam (ragamalika). Before concluding a short slokam vElunDu bhayamillai in varali was presented with Sivan’s masterpice ka va va. The varali sounded lovely at the end of the concert.

Smt Seethalakshmi certainly brings Semmangudi’s bani in her presentation, but instead of sounding like mimicking her guru, she presents it with her own voice and as her own music as assimilated by her from her guru. There is a consistency in her singing, a sense of nischayam in her approach. Her guru has left us in her a legacy for all of us enjoy.

The vocalist was ably assisted by Sri Nishanth Chandran on the violin and Sri Raamkumar Balamurthi on the mridangam.